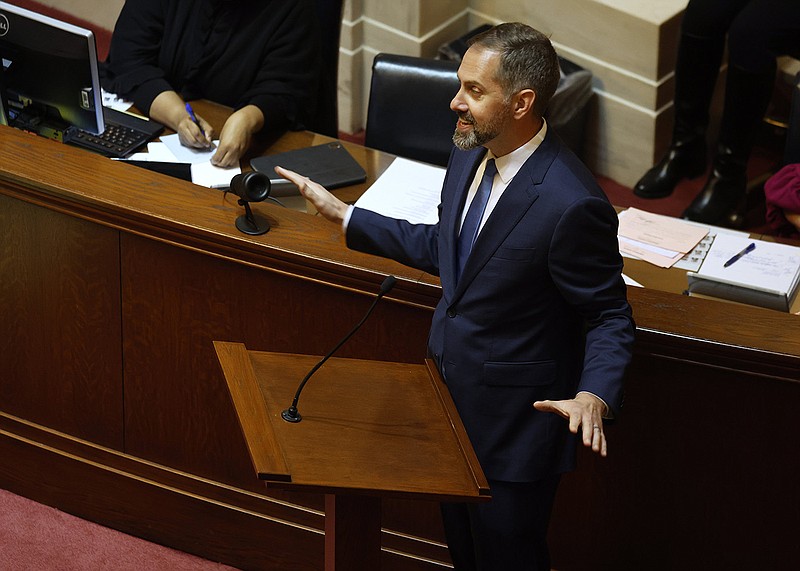 Sen. Greg Leding, D-Fayetteville, speaks against SB43, a big that would classify drag performances as adult-oriented businesses, during the Senate session on Tuesday, Jan. 24, 2023, at the state Capitol in Little Rock. (Arkansas Democrat-Gazette/Thomas Metthe)

The Arkansas Senate on Tuesday handily approved a bill that would classify "drag performances" as an adult-oriented business, after supporters and opponents disagreed about whether it is targeted at particular groups.

In a party-line vote, the Senate voted 29 to 6 to send Senate Bill 43 by Sen. Gary Stubblefield, R-Branch, to the House for further action. All 29 Senate Republicans voted for the bill. All six Senate Democrats voted against the bill.

SB43 would add "a drag performance" to that list.

A "drag performance" as defined by Stubblefield's bill requires at least one performer to exhibit a "gender identity that is different from the performer's gender assigned at birth," must be held before an audience of at least two people for entertainment and must appeal to "the prurient interest."

"I can't think of anything good that can come from taking children and putting them in front of a bunch of grown men dressed like women," Stubblefield told senators.

"We live in a world today that is so unlike the world that I grew up in," he lamented.

"Morally we are going down a funnel," Stubblefield said.

Children are confused by looking at drag queens, who are men dressed up as women, he said.

"We have got a lot of kids ... so confused about their own gender that some of them have to go to psychologists and get help," Stubblefield said.

He said parents can take their children to a circus if they want to see people dressed up in costumes.

Stubblefield said he received an email that alleged he hates drag queens, and that that's a lie.

Stubblefield said his bill wouldn't stop a Shakespeare drama, and he suggested that opponents of the bill are engaging in "scare tactics."

But Sen. Stephanie Flowers, D-Pine Bluff, said Stubblefield wants to put a target on the backs of people he doesn't see as normal, and that people have cross-dressed for many hundreds of years.

Stubblefield countered, "I am not targeting anyone."

Sen. Tyler Dees, R-Siloam Springs, said, "We have an issue that is a cultural battleground right now and our children are at the forefront."

Sen. Clarke Tucker, D-Little Rock, said he is not convinced the Legislature stands for limited government.

"When it comes to other people's lives, I believe this Legislature is for big government to control those lives," he said, adding that it's happened in previous Legislatures.

Tucker said the focus in recent years has been directed at transgender Arkansans.

Senate Bill 43 is about bullying, he said.

People can go to Twin Peaks or Hooters in west Little Rock, where there is activity 100% designed to appeal to the prurient interest, and children are running around there, Tucker said.

The bill is both mean-spirited and unconstitutional because it targets transgender Arkansans and violates the equal protection clause in the United States Constitution, he said.

The term prurient is not defined in the bill and what is prohibited is not fleshed out, Tucker said, and he questioned whether it would apply to the "Tootsie" musical in Fayetteville or Little Rock.

But Senate Republican leader Blake Johnson of Corning said "you can't sexualize your production is what this bill is about."

"It is not about having men dress as women in a parade," he said. "It would include that if those actions are sexualized, not if they are just merely dressed as the other gender. If they have pasties on and are walking down the street, that's sexualization. There is a difference, and our children do not need to be sexualized to the other genders, and this is common sense to me."

Sen. Linda Chesterfield, D-Little Rock, said parents have a choice about where they take their children.

"Nobody is making any parent take their children to see anything untoward," she said.

Asked afterward whether Republican Gov. Sarah Huckabee Sanders plans to sign SB43 if the bill clears the state House of Representatives, Sanders spokeswoman Lexa Henning said Tuesday in a written statement that "Governor Sanders believes we need to be protecting and educating kids, not indoctrinating them.

"It's time to get back to letting kids be kids again," she added.