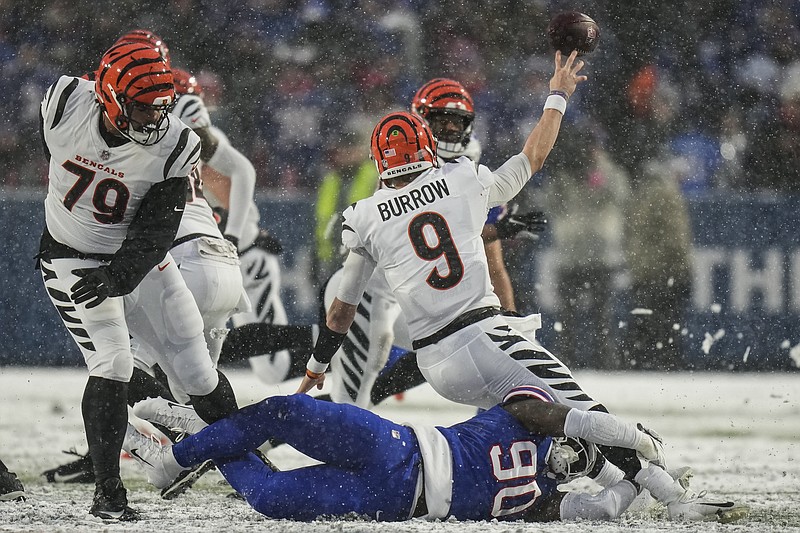 CINCINNATI -- Coach Zac Taylor says he never doubted the toughness of the Cincinnati Bengals offensive line, no matter how many backups had to be pushed into service to replace the injured starters.

"We've had confidence throughout," Taylor said Monday, a day after Cincinnati dominated Buffalo to advance to the AFC Championship Game. "I think it's everybody else who wants to create a narrative of no confidence."

Nobody would have blamed Taylor if he had been a little uneasy about the situation. The Bengals were going into snowy Buffalo with three replacements on an offensive line that had been such an important part of Cincinnati's winning streak in November and December.

Jackson Carman, 23, started an NFL game at tackle for the first time, slotting in for Jonah Williams, who was out after dislocating a kneecap last week. Hakeem Adeniji started his third game this season in place of La'el Collins (knee) at right tackle, and Max Scharping started a second at right guard for Alex Cappa (ankle).

The result was a 27-10 win and one of the most complete games of the season for the Bengals offense.

The line benefited from Joe Burrow's ability to speed through his progressions and get the ball out fast.

The third-year quarterback picked apart the Bills, completing his first nine passes and giving the Bengals a 14-0 lead in the first quarter. Running back Joe Mixon picked up yards in chunks, finishing with 105 yards and a touchdown. Burrow was sacked just once and took only three hits.

"They were mauling guys," Mixon said of the O-line.

Mixon had his first 100-yard game since putting up 153 yards and four touchdowns in the Week 9 win over Carolina that started the Bengals on their current 10-game win streak.

Center Ted Karras was credited with keeping the linemen together and making sure they were communicating. Karras got banged up himself, getting his right knee taped in the second quarter and visibly limping, but he played through it.

"We knew we had a big task on our shoulders against a great defensive front with three [new] guys coming in, and the biggest moment in our football lives up until this point, so unbelievable performance," said Karras, a seven-year veteran who spent the first part of his career blocking for Tom Brady in New England. "I'm so proud of the guys."

Adeniji, who started nine games last season and sometimes struggled with pass protection, has held his own at right tackle since Collins tore an ACL against the Patriots on Christmas Eve.

"You got three new guys that haven't played together a whole lot. It's a loud environment, which already makes it difficult with guys who are on the same page," Adeniji said.

"Obviously, there's other things, but that was the biggest thing. I feel like we were able to nail that, and we were in unison on a lot of the stuff that we were doing, and it pays dividends."

Cappa, who has an ankle injury, and Williams are considered week to week so their status for Sunday's AFC championship game at Kansas City is uncertain.

Taylor would say only that both players were "improving every day, and we'll see where it ends up."

Regardless of who can go, Cincinnati now knows it can adapt and thrive against the Kansas City Chiefs, a team the Bengals beat 27-24 on Dec. 4.

Adeniji said it's all about keeping Burrow clean. The Bengals don't need to be reminded that he was sacked 19 times in the postseason last year.

"Joe is one of the premier players in the league," Adeniji said. "He's such a leader for our team and does so much for our team, we want to do our job to be able to let him perform to the best of his ability -- because he's going to take us where we need to go." 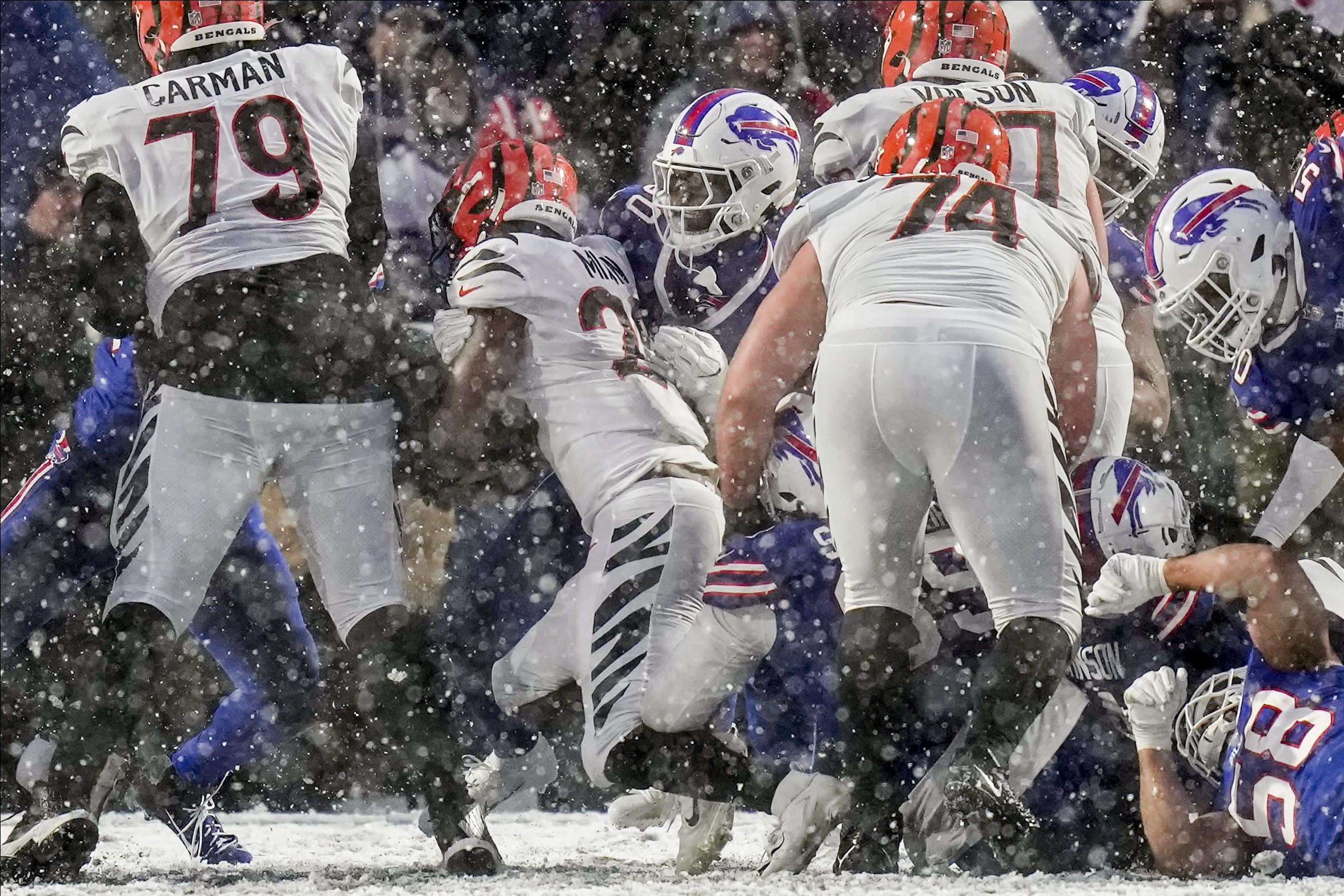 Cincinnati Bengals running back Joe Mixon (28) pushes across the goal line for a touchdown against the Buffalo Bills during the third quarter of an NFL division round football game, Sunday, Jan. 22, 2023, in Orchard Park, N.Y. (AP Photo/Seth Wenig) 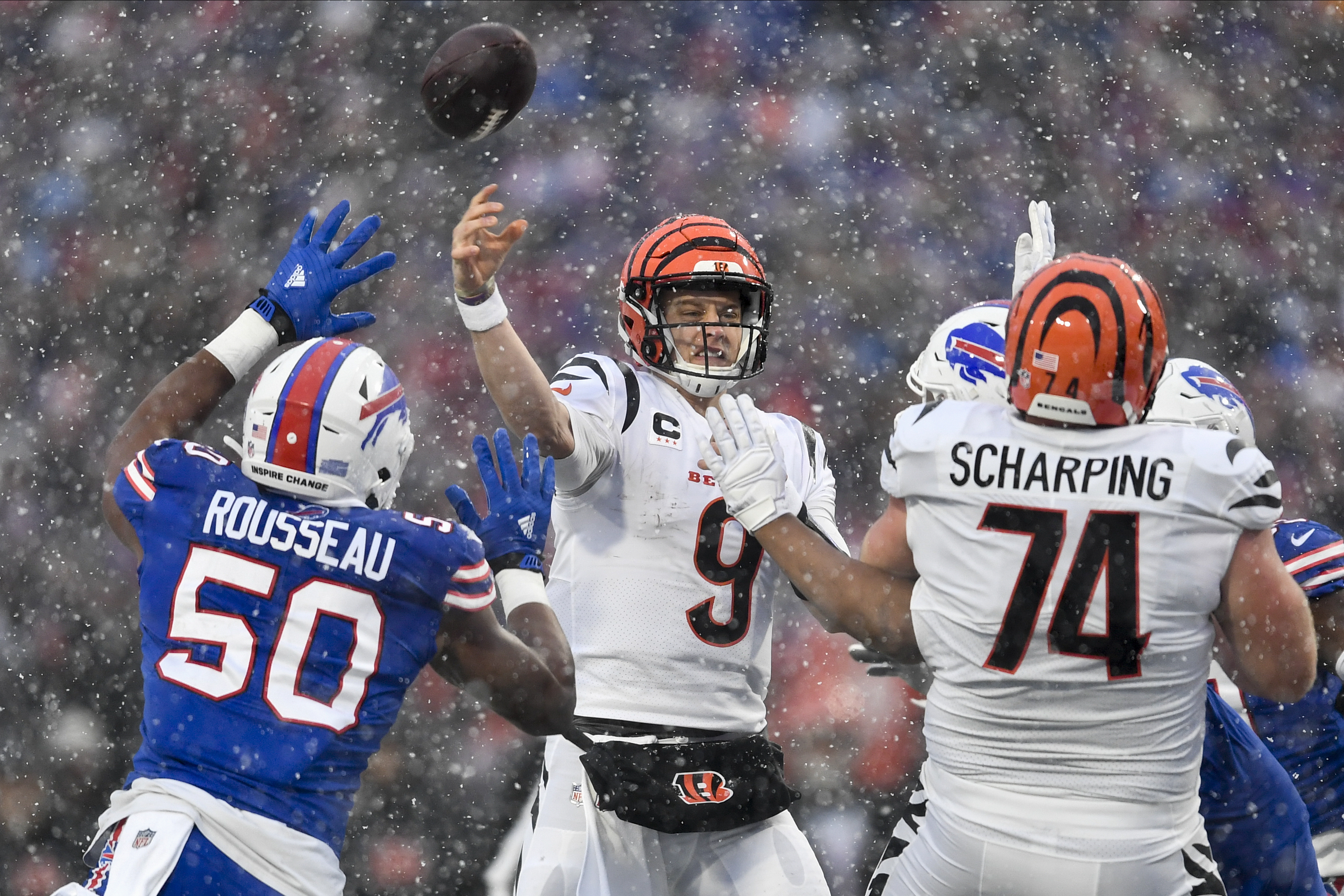 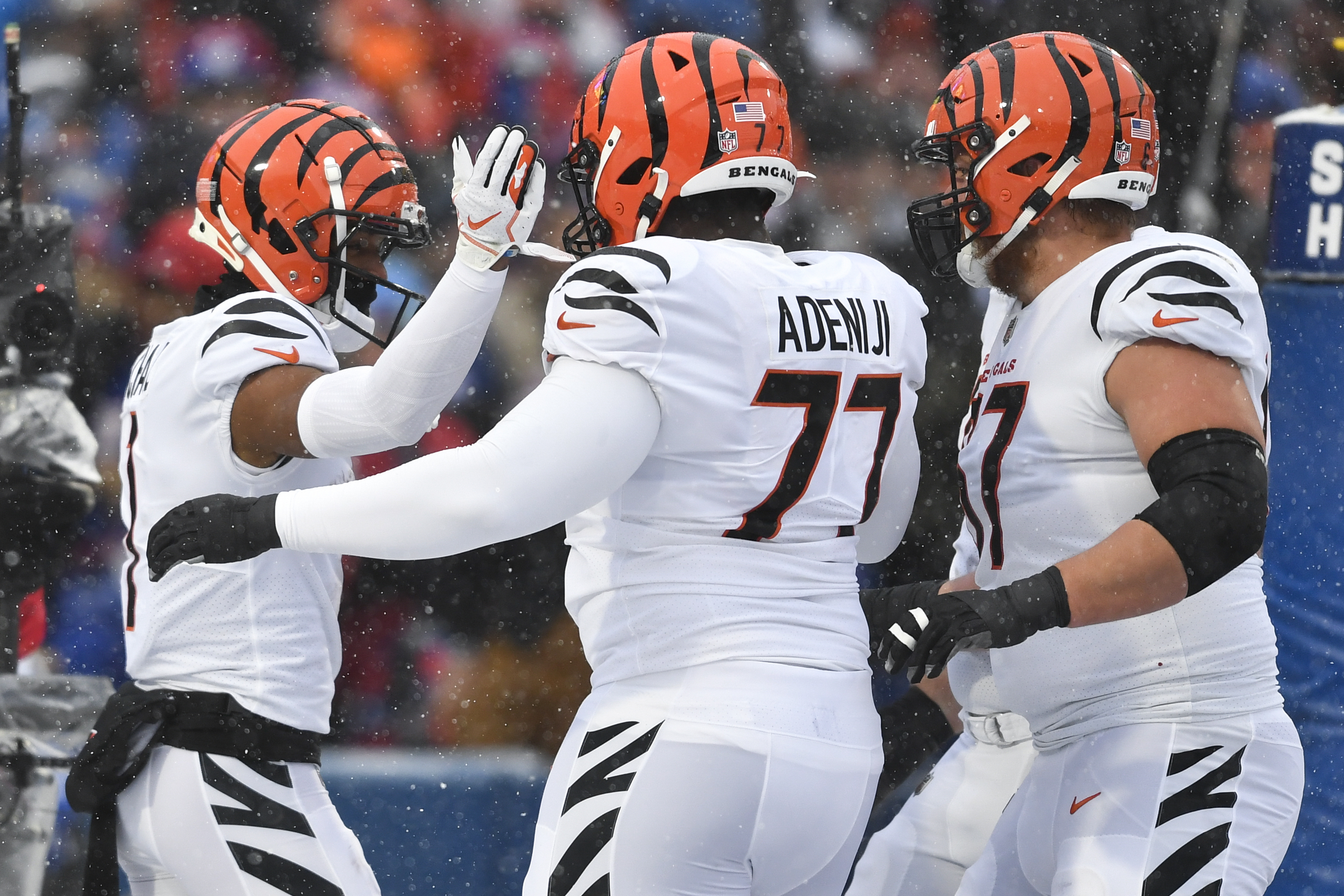 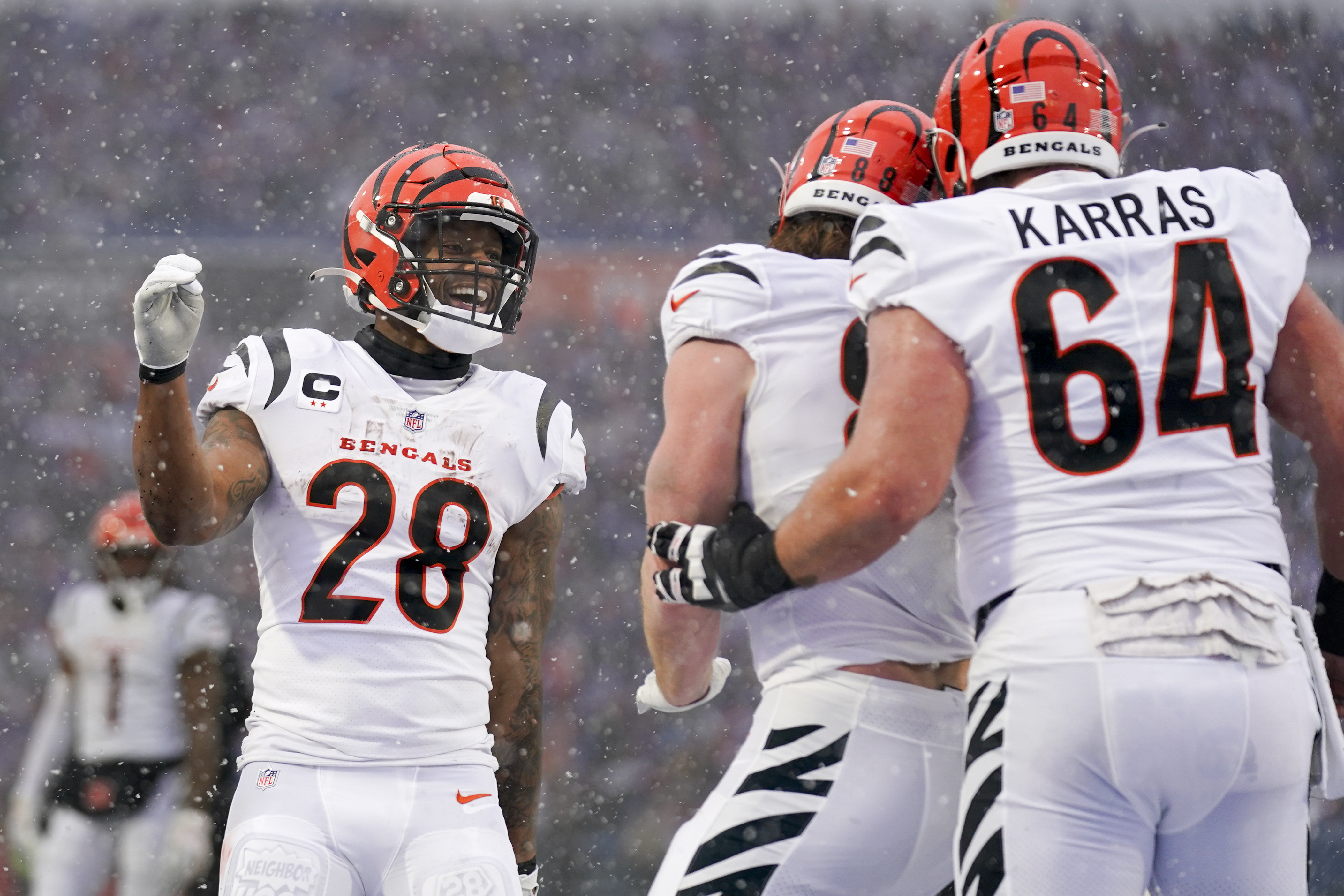 Cincinnati Bengals running back Joe Mixon (28) celebrates with teammates after a touchdown by tight end Hayden Hurst (88) against the Buffalo Bills during the first quarter of an NFL division round football game, Sunday, Jan. 22, 2023, in Orchard Park, N.Y. (AP Photo/Seth Wenig)