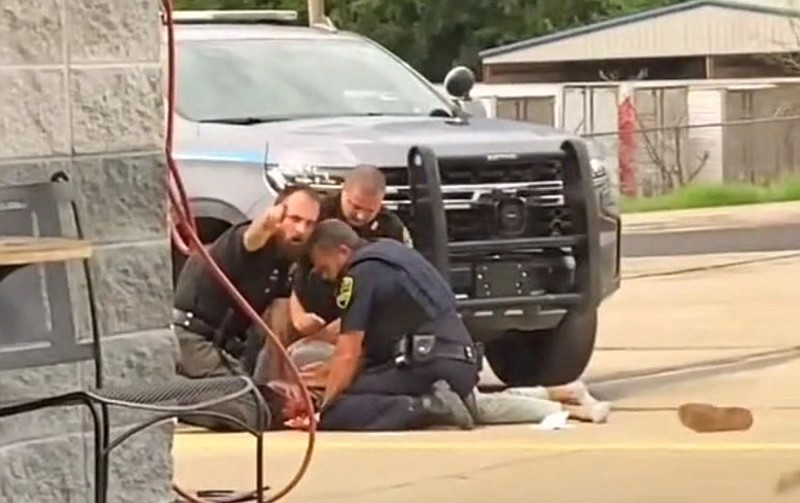 A law enforcement officer gestures toward a person recording the arrest of a man in Crawford County in this screenshot from a video recorded Sunday, Aug. 21, 2022. Crawford County Sheriff Jimmy Damante said the video shows two of his deputies and a Mulberry officer. (Courtesy Naomi Ruth Johnson, anthonyjohnson520; tiktok.com/@anthonyjohnson520/video/7134407649956777259)

FORT SMITH -- Two former Crawford County sheriff's office deputies were arrested and charged with federal civil-rights offenses Tuesday over the use of excessive force in connection with an arrest that was recorded and went viral in August.

Levi White, 32, and Zackary King, 27, were indicted on one count each of deprivation of rights under color of law Tuesday in U.S. District Court in the Western District of Arkansas. The indictment, filed Jan. 11 , accuses both men of striking Randal Worcester, 27, of Goose Creek, S.C., multiple times while Worcester was on the ground during an arrest Aug. 21, causing bodily injury.

White and King face a maximum prison sentence of 10 years if convicted of their respective charges, along with up to three years of supervised release and a fine of up to $250,000, according to a news release from the U.S. attorney's office for the Western District of Arkansas.

White and King both pleaded innocent during their arraignment Tuesday, according to court records. A jury trial was set for 9 a.m. April 3 before U.S. District Judge P.K. Holmes at the federal courthouse in Fort Smith.

White and King were released on $5,000 bonds Tuesday with conditions, according to court records. One condition is neither man can travel outside the Western District of Arkansas without approval from the U.S. probation office. White and King are represented in the case by attorney Russell Wood of the Wood Law Firm in Russellville.

Wood said Tuesday the allegations the indictment contained aren't true and he and his clients look forward to presenting their side of the matter at the jury trial.

King and White, as sheriff's deputies, along with officer Thell Riddle of the Mulberry Police Department, were recorded on video using force while arresting Worcester at about 10:40 a.m. Aug. 21 outside the Kountry Xpress convenience store in Mulberry. The video showed the officers repeatedly punching and kneeing Worcester, as well as telling a bystander to get away from the scene.

An officer identified as White in a federal civil-rights lawsuit Worcester filed Aug. 29 was also shown slamming Worcester's head to the pavement.

White and King were fired effective Sept. 29 with a recommendation for decertification due to "excessive use of force," according to records from the Arkansas Division on Law Enforcement Standards and Training. They had been suspended with pay after Worcester's arrest.

Riddle was still on administrative leave as of Dec. 20, according to Mulberry Police Chief Shannon Gregory. Hagan said Tuesday that Riddle hadn't been arrested by the FBI or Marshals Service.

Outside the federal probe, attorney Emily White has said she was appointed special prosecuting attorney for the Arkansas State Police's independent investigation into the use of force in Worcester's arrest. She received the investigative file from the state police Sept. 2.

Worcester's lawsuit accuses White, King and Riddle, as well as Mulberry Chief Gregory, then-Crawford County Sheriff Jimmy Damante, Mulberry, the Mulberry Police Department, Crawford County and the Crawford County sheriff's office of violating Worcester's rights under the Fourth and 14th amendments to the U.S. Constitution and, by extension, federal law. It also accuses them of committing negligence, battery and assault against Worcester.

White filed a counterclaim to Worcester's lawsuit Oct. 6 accusing Worcester of battery and asking for a judgment for the damages he says Worcester inflicted on him Aug. 21. A jury trial for the lawsuit is scheduled for Sept. 11.

Damante said Aug. 25 that Worcester was reported to have threatened a female employee at Sargent's gas station off Interstate 40 in Alma with a knife Aug. 21. Worcester then spit on the woman and left by bicycle, Damante said.

White, King and Riddle encountered Worcester shortly afterward in Mulberry, Damante said. Worcester, who still had a knife, reportedly gave the officers a false name. Worcester then "aggressively tackled" one of the officers trying to arrest him, slamming the officer's head into the concrete and causing a concussion, in addition to punching him on the head, Damante said.

The video of the incident that went viral through social media didn't include any of this, though some of it was recorded via a vehicle camera, according to Damante.

Damante also said Worcester is a convicted felon who's been charged with, or convicted of, multiple incidents in the past 10 years, including an assault on a police officer.

Worcester pleaded guilty in Cleveland County, Okla., to felony assault and battery on a police officer and misdemeanor obstructing an officer in August 2021, according to records provided by the county's district court clerk. He received a 3-year suspended prison sentence for the first charge and a 60-day sentence for the second charge, including time served, court records state.

Attorneys Adam Rose and David L. Powell of Fort Smith have filed three federal civil-rights lawsuits concerning reported uses of force against the Crawford County sheriff's office, the sheriff, the county and King since Worcester's arrest. This includes Worcester's lawsuit, as well as others they filed on behalf of Sarah Trammell, 44, of Uniontown on Oct. 14 and Polly Risenhoover, 67, of Dyer on Jan. 12.

Rose said Tuesday that the arrests of White and King are "a great step in the right direction for accountability and justice for all the victims of Crawford County."

"We will continue to fight for justice and accountability in the pending federal lawsuits for many of our clients and for the community as a whole," Rose said.

Worcester is now represented in his lawsuit by Oklahoma City-based attorney Rachel Bussett, according to court records. 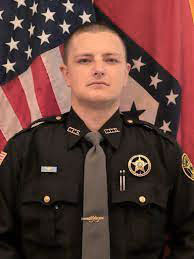 Randal Worcester pleaded not guilty in Crawford County Circuit Court on Dec. 14 to charges stemming from his Aug. 21 arrest. This includes felony charges of first-degree terroristic threatening and second-degree battery, in addition to misdemeanor charges of resisting arrest, possessing an instrument of crime, obstructing governmental operations and disorderly conduct.

A pretrial hearing has been set for 9 a.m. April 4 in Van Buren.