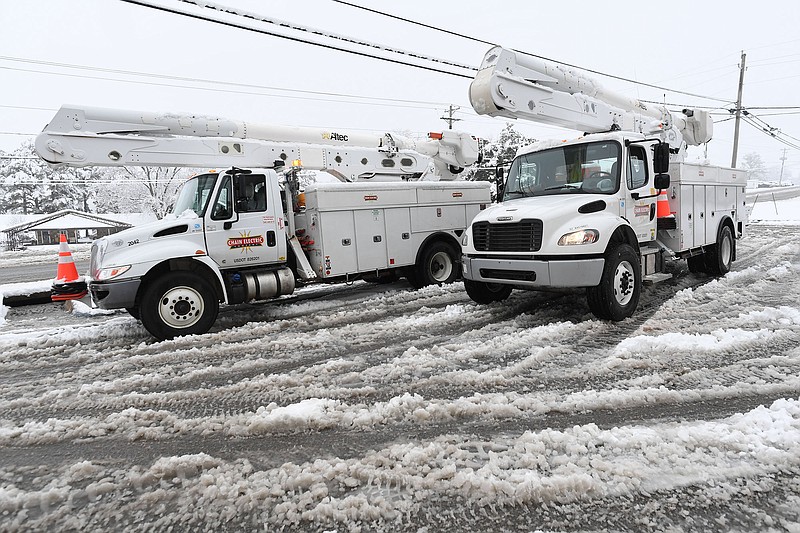 Some people in Benton and Washington counties woke up Wednesday morning without power after a heavy, wet snow fell overnight.

There were a combined 18,387 customer outages reported by Southwestern Electric Power Co. and Ozarks Electric Cooperative in Washington County at a little after 8 a.m., according to the website poweroutage.us.

There were a reported 2,153 power outages in Benton County, most coming from Southwestern with 1,196 and Carroll Electric Cooperative with 685, according to poweroutage.us.

There were 9,710 outages reported in Sebastian County. Southwestern Electric Power Co. reported 4,151, Arkansas Valley Electric Cooperative with 3,129 and 2,430 outages from OG&E Energy Corp., according to poweroutage.us.

Fayetteville reported 8 inches of snow, said Karen Hatfield, a meteorologists with the National Weather Service in Tulsa. Springdale had 5 inches as of 11:30 p.m. Tuesday, the last report to the weather service. Rogers had a little over 4 inches of snow and Bentonville and Fort Smith reported 4 inches, Hatfield said.

Melody Kwok, Benton County communications director, said about 9 a.m. that county crews still working on a few paved/primary roads on the west side of the county. The east side still has several roads that need to be plowed. The roads that have been plowed and sanded and salted were passable Tuesday morning. There will be some slick spots as the snow melts, she said.

There could be patchy drizzle and snow before noon today, according to the weather service. It will be cloudy, with a high near 36. The low tonight will be around 20 with wind chill values between 8 and 18.

On Thursday it should be mostly sunny with a high near 36. Wind chill values will be between 8 and 18. The low will be around 24 Thursday night, according to the weather service.

Bentonville streets were mostly passable by early morning, said Dennis Birge, city transportation director. City crews cleared the arterial and collector roads before 6 a.m. and worked local and side streets after that, he said.

“It’s slushy in some areas,” Birge said. “For the most part it is just wet. If the temperature stays up, it all should run off.”

Fayetteville city offices were closed for the day, according to the city website.

Washington County offices were also closed, according to the county website.

In Fayetteville, police reported few problems with city streets during the period from Tuesday afternoon through Wednesday morning.

“We’ve had eight accidents since 4 p.m. yesterday,” Sgt. Anthony Murphy, public information officer for the Police Department, said at 9:30 a.m. “We had reports of 10 traffic hazards, which is vehicles stuck on the roadway. There are no street closings that I’m aware of. Around 6 p.m. last night Township was closed between College Avenue and Old Wire Road due to some accidents or vehicles off the roadway.

“At College and Township a vehicle hit a gas line so the gas company had to come out and shut that off,” Murphy said. “We had an accident at Woolsey and Sycamore streets. It’s mostly on streets where there are hills. We had a number of transformers blow and there were several power outages.”

The website idrivearkansas.com showed Interstate 49 clear from Alma to Fayetteville, then slushy to Bentonville. Most state highways in Benton and Washington counties reported slushy conditions as of 9 a.m., according to the website.