Timeline for delivery still uncertain by Compiled by Democrat-Gazette Staff From Wire Reports | January 25, 2023 at 5:18 a.m. 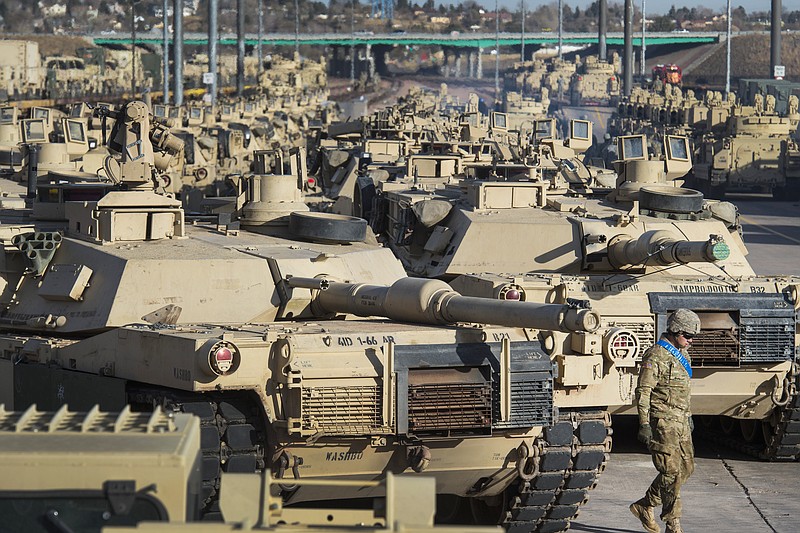 FILE - A soldier walks past a line of M1 Abrams tanks, Nov. 29, 2016, at Fort Carson in Colorado Springs, Colo. In what would be a reversal, the Biden administration is poised to approve sending M1 Abrams tanks to Ukraine, U.S. officials said Tuesday, as international reluctance toward sending tanks to the battlefront against the Russians begins to erode. The decision could be announced as soon as Wednesday though it could take months or years for the tanks to be delivered. (Christian Murdock/The Gazette via AP, File)

WASHINGTON -- Reversing its long-standing resistance, the Biden administration is poised to send M1 Abrams tanks to Ukraine, U.S. officials said Tuesday, as international reluctance to send tanks to the battlefront against the Russians begins to erode. A decision to send a bit more than 30 tanks could be announced as soon as today, though it could take months for the tanks to be delivered.

U.S. officials said details are still being worked out. One official said the tanks would be bought under an upcoming Ukraine Security Assistance Initiative package, which provides longer-range funding for weapons and equipment to be purchased from commercial vendors.

The U.S. announcement is expected in coordination with an announcement by Germany that it will approve Poland's request to transfer German-made Leopard 2 tanks to Ukraine, according to one official. The officials spoke on condition of anonymity because the decision has not yet been made public.

By agreeing to send the Abrams at an as-yet unspecified time under the assistance initiative, the administration is able to meet German Chancellor Olaf Scholz's demand for an American commitment without having to send the tanks immediately.

Much of the aid sent so far in the 11-month-old war has been through a separate program drawing on Pentagon stocks to get weapons more quickly to Ukraine. But even under that program, it would take months to get tanks to Ukraine and to get Ukrainian forces trained on them.

It wasn't clear Tuesday how soon the U.S. will start training Ukrainian troops on the Abrams and roughly how soon they can get to the battlefront.

Until now, the U.S. has resisted providing its own M1 Abrams tanks to Ukraine, citing extensive and complex maintenance and logistical challenges with the high-tech vehicles. Washington believes it would be more productive to send German Leopards since many allies have them and Ukrainian troops would need less training than on the more difficult Abrams.

Under Secretary of Defense for Policy Colin Kahl told reporters last week that the Abrams is a complicated, expensive, difficult to maintain and hard to train on piece of equipment.

One thing Defense Secretary Lloyd Austin has been very focused on, he said, "is that we should not be providing the Ukrainians systems they can't repair, they can't sustain, and that they, over the long term, can't afford, because it's not helpful."

A U.S. official familiar with White House thinking said the administration's initial hesitancy was based on concerns about the requisite training and the sustainment of the tanks. The official added that the administration believes that such plans are now in place, but it could take time to implement them.

As recently as Monday, a Pentagon official told reporters that the Abrams tanks would be difficult for Ukrainian forces to maintain, in part because they run on jet fuel. But the decision to send a relatively small number of tanks, and the expected delay in delivery, could outweigh concerns about escalating the war while providing political benefits for the administration.

Defense officials have repeatedly used the fuel issue to explain in part why the administration was not sending the Abrams tanks to Kyiv. But while it is true that the tanks have gas turbine engines that burn jet fuel, it is not the whole story, tank experts say.

Abrams tanks, they say, can run on any type of fuel, including ordinary gasoline and diesel.

The Pentagon press secretary, Brig. Gen. Patrick Ryder, declined to confirm news reports Tuesday that the administration was on the verge of providing Ukraine with the M1 Abrams tanks.

"When and if we have something to announce, we will," he said.

He called the Abrams tank "a very capable battlefield platform."

"It's also very complex capability," Ryder said. "And so, like anything that we're providing to Ukraine, we want to ensure that they have the ability to maintain it, sustain it, to train on it."

He did not refer to the issue of fuel.

Lawmakers in Congress have also been pushing the U.S. to beef up its aid to Ukraine.

"It's time, past time, for the Biden administration and our allies to get serious about helping Ukraine finish the job and retake their country," he said.

Robert Abrams, a former U.S. Army armor officer and four-star general who retired in 2021, said the effort would be "herculean" but not impossible.

"The time it would take to get there -- to be able to build up the supply stockage, to deliver the vehicles, to train the crews, to train the mechanics, to gather everything you'd need -- how long would that take?" Abrams, who has extensive experience in the M1 tank, which was named for his father, Gen. Creighton Abrams, said in an interview. "I don't know, but it ain't like 30 days, I can tell you that."

The Biden administration's reversal comes just days after a coalition of more than 50 senior defense officials from Europe and beyond met in Germany to discuss Ukraine's war needs, and battle tanks were a prime topic.

Many European countries use German-built Leopards, which number about 2,000 across the continent, and Ukraine has pleaded for tanks in recent weeks, describing them as necessary to counter Russia's advantages in arms and men. But Germany had resisted mounting pressure either to supply its own tanks or clear the way for other countries, such as Poland, to send the German-made tanks from their own stocks.

Defense leaders from the countries that have Leopard 2 tanks met with the Germans during the Friday conference at Ramstein Air Base in an effort to hammer out an agreement.

On Sunday, Berlin indicated it wouldn't stand in the way if other countries wanted to send the Leopard 2 tanks to Kyiv. Germany needs to agree for the tanks to be given to Ukraine, which is not a member of NATO.

U.S. and German officials have given mixed signals about whether the U.S. and German decisions are linked, and whether Berlin was hesitant to send its tanks unless the U.S. sent Abrams.

Poland has officially requested permission from Germany to transfer its Leopard 2 battle tanks to Ukraine, Polish Defense Minister Mariusz Blaszczak said Tuesday. He said other countries have indicated they would do the same if Germany agreed.

German officials confirmed to the dpa news agency they had received the application and said it would be assessed "with due urgency." German Foreign Minister Annalena Baerbock said Sunday that Berlin wouldn't seek to stop Poland from providing the high-tech armor to Kyiv.

Germany's new defense minister, Boris Pistorius, said last week his country would also begin to train Ukrainians to use Leopard tanks, despite the lack of agreement at the time on whether to send them.

"It's to prepare for a day that will possibly come, at which point we would be able to act immediately and deliver the support within a very short period of time," he told reporters.

German officials declined to comment on the reports of a tank deal. The news weekly Der Spiegel reported Tuesday, without citing a source, that Germany will provide Ukraine with at least one company of Leopard 2 tanks from its own army's stock. A company comprises 15 tanks.

Scholz is due to deliver an address to parliament today and field questions from lawmakers, many of whom have been pressing the government to join allies in providing the tanks to Ukraine.

In Kyiv, Finland's president, Sauli Niinisto, told reporters at a news conference that he had discussed the supply of Western tanks to Ukraine with President Volodymyr Zelenskyy.

Information for this article was contributed by Lolita C. Baldor, Matthew Lee, Tara Copp, Kevin Freking and Aamer Madhani of The Associated Press and by Helene Cooper and Eric Schmitt of The New York Times.