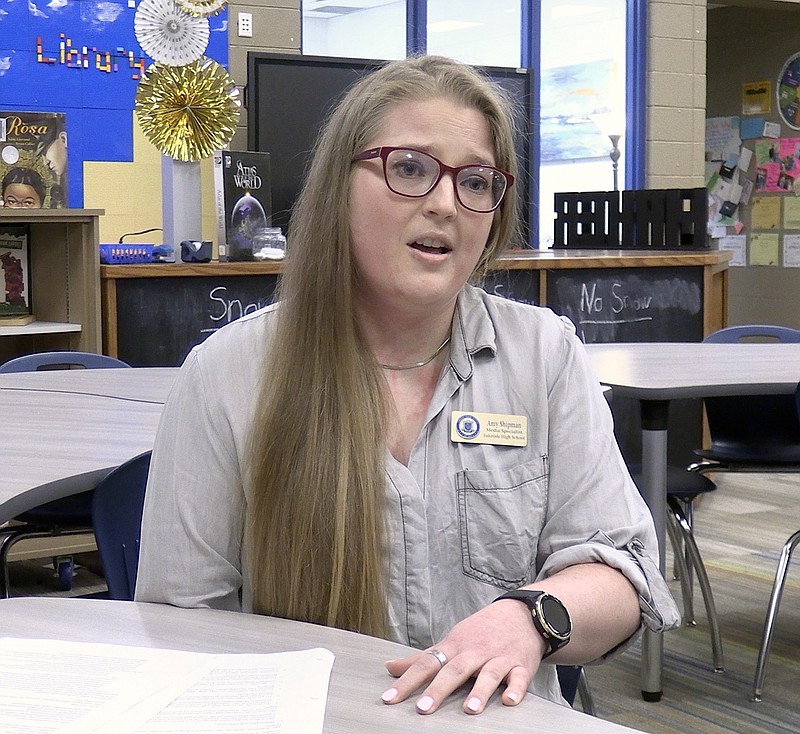 Lakeside High School Library Media Specialist Amy Shipman talks about how Senate Bill 81, which was referred to the state Senate Judiciary Committee Monday, could affect students across the state. - Photo by Donald Cross of The Sentinel-Record

Amy Shipman, media specialist at the Lakeside High School library in Hot Springs, expressed concern Tuesday that a bill set to go before the state Senate Judiciary Committee this morning is too vague and could someday mean that libraries are no longer refuges for children.

"To me, the library is such a special place, and it's such a refuge for my students," Shipman said. "And I'm fearful if things (happen to) no longer make it a refuge. I know this is just the early stages, but there is that fear of 'What's next? When will it stop? And will this ultimately hurt my students?'"

The bill, introduced by state Sen. Dan Sullivan, R-District 20, considers any item that describes or represents "nudity, sexual intercourse, deviate sexual activity, sexual contact, sexual excitement, or sadomasochistic abuse" as harmful to children, but Shipman argued the bill could create a situation that is harmful to students.

"I take great pride in building a collection and building a library program that meets their needs and that they find that they're welcome here and they can know that they are finding the resources they need, and they're finding the help from the library employees here, whether it's just because they want to find a good book to read or they need help with an assignment," Shipman said.

"So that's my fear is that we get to a point that we're hurting our students. And ultimately, we're here for our students. We create a place -- a safe place, a welcoming place -- and it would break my heart to see that change."

Sullivan said Monday in a phone interview that items that are questioned would only have to be removed from the children's area of the library, but the bill states that anyone who "loans at a library" items that could be considered obscene "is guilty of a Class D felony" with no concessions given for items outside of the children's area.

"The library can avoid that by just simply moving it away out of the children's section and moving it back in or leaving it out, depending on what's rendered by the court," Sullivan said.

"Right now, there's really no recourse if a parent complains about a book being harmful to children, and the library board or the school board says you're wrong. That's kind of the end of it. There's nowhere else for the parent to go. Right, this bill creates another avenue to go to the court and see if the court has a remedy."

Shipman said her primary concern with the bill is how vague it is.

"It's vague on what those materials are and what exactly can be called obscene, which then gives me the question of 'Where's the limit?'" she said. "What materials in the library could be called that, just by what's in the bill? It was very vague, seemed kind of put together. There's no detail there. And then going with that, who would be at fault?"

Libraries, especially school libraries, have limits on what items they can purchase and provide for loan.

"I take my collection development, the selection of materials, very seriously," Shipman said. "There are things already in place, laws in place, for school libraries. We have the Library Bill of Rights, which gives us a selection policy. We have here at Lakeside a selection policy for our school and for our building, because my building's ninth- through 12th-graders.

"So it is my job to get resources that support the curriculum, what's being taught in our building, as well as age-appropriate quality literature for ninth- through 12th-graders," she said.

April Grace, Hot Springs World Class High School Library Media Specialist, said in an emailed statement Tuesday that the school district's policies encourage the libraries on all six campuses to "challenge the different interests, learning styles, and reading levels of the school's students and that will help them attain the District's educational goals.

"If leadership at the state or federal level makes changes to the way in which we should choose materials and items available to students that utilize our libraries, we would work with our HSSD School Board, Superintendents, and Principals to update our Selection of Library/Media Center Materials Policy accordingly and in the best interest of our students and families, and our staff members -- including Library Media Specialists," she said in the statement.

School libraries, by state law, are required to have a reconsideration policy for items that are questioned, Shipman said. At Lakeside, that consists of the completion of a form stating why the item is being questioned, a committee is selected to read the item and make a determination along with administration, a meeting between the administration and the complainant, and eventually going to the school board.

Sullivan publicly signed a petition in 2021 that ultimately resulted in the funding for the Jonesboro Public Library to be cut in half following the library's erecting a display for Pride Month.

The Senate Judiciary Committee is set to meet today at 10 a.m., and both Garland County senators, Alan Clark and Matt McKee, are on the committee.