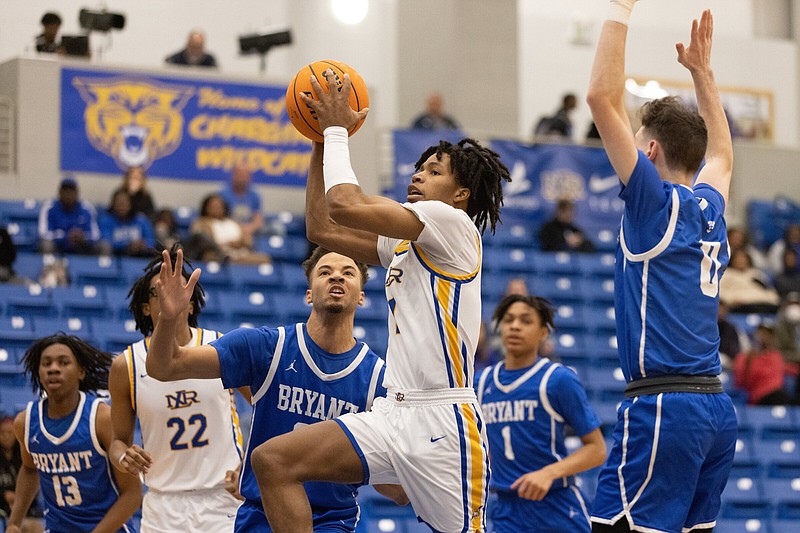 "[Withers] makes us go," North Little Rock Coach Nathan Clayborn said. "If he's playing well, we have a great game. He makes us go. He was kind of under the weather, so we subbed for him a little more than we like, but he gave it his all, and that's all we can ask."

"In the fourth quarter, Withers was really good," Bryant Coach Mike Abrahamson said. "He showed his poise and his experience, and that's something we're lacking right now. We have some young, talented players, but to have that experience and poise to not get rattled, I thought was big for them."

A three-point play by sophomore guard Jones, Jr., with 1:21 left in the third quarter gave Bryant a 36-35 lead. North Little's offensive response came with a layup by Barnes and a three-pointer at the buzzer from junior guard Blake Segars to take a 39-36 lead into the fourth quarter.

North Little Rock did not trail in the game's final 8:35, but Bryant stayed close until late.

A layup by Fowler had Bryant within 43-40 with 6:21 left in the fourth quarter, but a free throw by Segars, followed by a three-point play from Griffin at 4:51, gave North Little Rock a 47-40 lead.

"Man, their guys fought hard," Clayborn said. "They're big. They're physical, and they got shooters, and they got playmakers, but we fought. We worked hard, played hard, and we found a way to extend that lead a little bit."