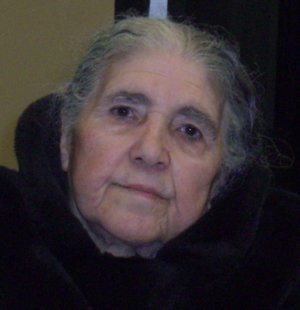 Nali Ghanem Kassees "Yama" the wife of the late Ghanem Atallah Kassees was born on February 13, 1929 in the City of Ramallah in the Holy Land of Palestine and died, Monday, August 1, 2011 in North Little Rock, Arkansas, the city she called home since 1969, four months after the passing of her sister Naimeh Alley. Nali was a strong Christian believer in her own way and a member of the Annunciation Greek Orthodox Church.
Nali's profession was a homemaker, raising six children and seven grandchildren. She did her duty and responsibility to her family in an honorable and admirable manner that is hard to compete with. She was a Yama "mother" to all. She left behind a large family; the Kassees, Alley and Akel families, numerous grandchildren, great-grandchildren and extended family. Her death brings a new chapter to the Kassees family.
Friends and family will be gathering at 1214 Dyson Drive in Sherwood. Services will be held 11:30 a.m., Friday at Annunciation Greek Orthodox Church of Little Rock. Memorial prayers will be 6 p.m., Thursday at North Little Rock Funeral Home, 1921 Main St., 758-1170. Burial will be in Rest Hills Memorial Park. Online obituary and guest registry at www.nlrfh.com.