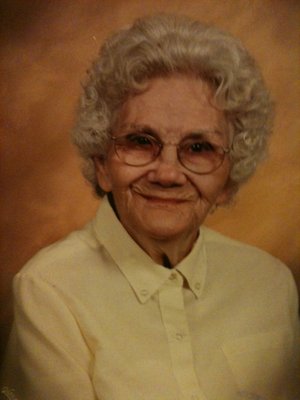 Teddy May Pulley, age 88, of Little Rock, Arkansas passed away Dec 7, 2011. Teddy was born on April 9, 1923.
Preceded in death by her father, TH Brucks, mother, Edna Brucks and husband, Clyde Pulley. Survived by her two daughters, Barbara Joann Blanton of Flint, Mich., and Jill Ann Works of Tennesee, both of whom she loved more than they will ever know; three grandchildren, Tony, Sean, and Nick; one brother, Bill Brucks and his wife Chloe of Little Rock, and one sister, Jackie Hinson and her Husband Harley of Tulsa, Okla.; four nieces and three nephews.
She was a member of Crystal Hill Baptist Church. She was a Private-First Class in the Army and served during WWII. She worked many years in nursing homes, and most recently Woodland Heights. She loved working in her yard and her many animals especially her cat named Bob.
Visitation will be Saturday December 10, 2011 at 1pm prior to the funeral service beginning at 2 p.m. at Griffin Leggett Forest Hills Funeral Home 10200 Hwy. 5 N, Alexander, Ark. 72002 with Pastor Larry Ballard officiating. Committal at Pine Crest Memorial Park. Memorials may be made to Crystal Hill Baptist Church, 18823 Crystal Valley Road, Little Rock, Arkansas 72210 or to the Pulaski County Humane Society, 14600 Col. Glenn Rd., Little Rock, Ark. 72210. www.griffinleggettforesthills.com.