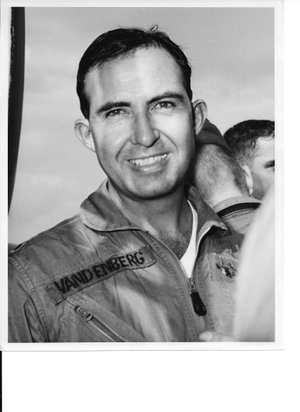 Duane Evert Vandenberg, 81, of Hot Springs passed away on Thursday, Dec. 22, 2011, at National Park Medical Center. He was born Nov. 12, 1930, in Scottsbluff, Neb., to Nielson Evert and Pearl Wayman Vandenberg. He was reared in Houston, Texas, and graduated from John H. Reagan High School in 1948, lettering and excelling in JROTC. He is a 1952 graduate of Texas A&M University, where he served in the Corps of Cadets and the prestigious Ross Volunteers--the Texas governor's honor guard. In his senior year, he married his high school sweetheart, Peggy Joyce Ward. Following graduation, he was commissioned a 2nd Lieutenant in the U.S. Air Force. During his career, he was stationed in Texas, Georgia, Alabama, California, Japan, Missouri, Arkansas, Hawaii, Virginia, Germany and Florida. He retired as a senior Colonel after 31 years of service. In the course of his career, he served in the Viet Nam War as a navigator on RF-4C reconnaissance aircraft. He was awarded one of his two Distinguished Flying Crosses during a sortie when his aircraft was hit by a surface-to-air missile, piercing a wing and destroying flight controls. Despite the damage to the aircraft, he was able to complete the mission and return the crew safely to base. Later in his career, he served as chief of Air Force intelligence at Central Command at MacDill Air Force Base, Fla. He retired to Arkansas in 1989 to be close to his family. He was active in Rotary International as a Paul Harris Fellow, the Air Force Association, the VFW, Toastmasters, the Former Students Association of Texas A&M, the Lions Club, Sons of the American Revolution, the Mayflower Society, and the Holland Society of New York. He and his wife, Peggy, enjoyed traveling and spending time with family and friends, especially those at St. Luke's Episcopal Church. He is survived by his wife of 60 years, Peggy; daughter, Linda Kay White, and her husband, Newton, of Hot Springs; daughter, Rene' Starr, and her husband, Joe, of Little Rock; a son, Dr. David Duane Vandenberg, of Hot Springs; and a son, CDR James Nielson Vandenberg, of Arlington, Va., of Little Rock and his wife, Diane S. Vandenberg. He is also survived by his grandchildren: Emily Chase White (predeceased), John Gabriel Starr, Matthew Cooper White, Matthew Killian Vandenberg, Kathryn Grace Starr, and Emelie Adeline Vandenberg. He is also survived by a brother-in-law, Merle (Buck) Ward and his wife, Lynda, of Conroe, Texas; sister-in-law Julia Ward of Rolla, Mo.; and four nephews: James (Skip) Ward of Houston, Texas; Larry Ward of Wexford, Penn.; Bill Ward of Tulsa, Okla.; Major David Ward of Ft. Riley, Kan. A memorial service will be held at St. Luke's Episcopal Church, 228 Spring Street, Hot Springs, on Wednesday, Dec. 28, 2011 at 11 a.m., officiated by the Rev. C.B. Baker. An Air Force fly-over will be held around noon over Hot Springs to mark Col. Vandenberg's service and devotion to his country. In lieu of flowers, the family asks that donations be made to St. Luke's Episcopal Church, P.O. Box 1117, Hot Springs, Ark. 71902, or your favorite charity. Arrangements are by Hot Springs Funeral Home. Online condolences at www.hotspringsfh.com.