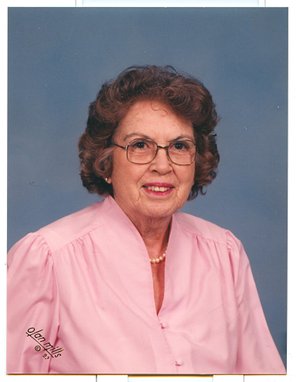 Margie King de la Houssaye passed away in Little Rock, Ark. on Dec. 9, 2011 at the age of 92. Margie was born in Tampa, Fla. on Jan. 23, 1919, to Andrew Jackson King and Anna Lawton Jaudon King. Her father was born in Kings Ferry, Fla. on Jan. 31, 1865. Her mother was born in Lawtonville, S.C. on Nov. 9, 1880. The youngest of six children, Margie was predeceased by her five King brothers. Margie began her education in Tampa at a school named "Glory," in September 1925. She attended Ballast Point Grammar School and Junior High, and later graduated from Plant High School. She then studied business at Brewster Vocational School until December 1937. Throughout her early years she was a member of Ballast Point Baptist Church in Tampa, Fla. In January 1938, Margie moved to New Orleans to study nursing at Southern Baptist Hospital, where she graduated as a registered nurse in January 1941. She practiced as private duty RN until 1975. In April of 1939, while studying nursing, she met Howard Louis de la Houssaye, who was born in New Iberia, La. on Nov. 13, 1905. They married Oct. 4, 1940 in New Orleans, where they would reside. Howard passed away on Oct. 20, 1988. Margie remained in New Orleans until 2004, when she moved to Little Rock, Ark. to be closer to her children. Margie and Howard had three children: James Louis de la Houssaye, who resides with his wife, Julie, in Vienna, Va.; Jon Wayne de la Houssaye, who resides with his wife, Robyn, in Little Rock, Ark.; and Gayle Marie de la Houssaye, who resides in Eureka Springs, Ark.; five grandchildren; four great-grandchildren; and numerous nieces and nephews. She was a faithful member of Edgewater Baptist Church in New Orleans and Oak Park Baptist Church in Little Rock. She was also a member of NARF Chapter 93, and a member of AARP Chapter 2362. This past year she has lived at "Andover Place" in Little Rock and had come to know and love many people there, including other residents, as well as the staff and caregivers. She loved and enjoyed her family and friends, along with her church, love of music, playing piano, sewing, cooking, gardening and so much more. Margie was a loving wife, mother and friend, and will be dearly missed by all who knew and loved her; she lived her life doing for others. Relatives and friends are invited to the Jacob Schoen & Son Funeral Home, 3827 Canal St., New Orleans, La. 70119 on Wednesday, Dec. 28 at 10 a.m., followed by a funeral service beginning at 11 a.m. Interment will follow at Jefferson Memorial Gardens, 11316 River Road, Saint Rose, La. 70087-3700. In memory of Margie, donations can be made to: Oak Park Baptist Church, 8200 Flintridge Road, Little Rock, Ark. 72210-9824.