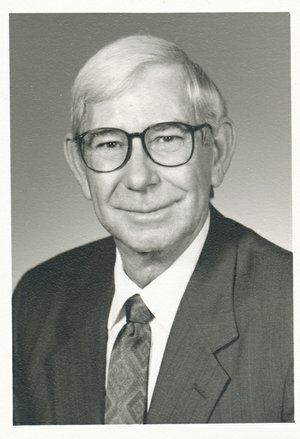 Dr. Kenneth G. Kersh of Dardanelle, Ark. passed away peacefully in his sleep on March 23, 2011. Kenneth was the son of George and Georgia Kersh of Fort Smith, Ark. During his 83 years on this earth, Dr. Kersh possessed a combination of rare qualities. He was an athlete, soldier, scholar and an excellent father and husband. It is extremely difficult to summarize his life within the boundaries of this document. Kenneth Kersh was raised in Fort Smith, Ark. and it was from there that he began on his path to touch the lives of many people. At the age of 18 years old Kenneth enlisted in the Air Force and became flight engineer on a B-17. Once he left the U.S. Air Force Kenneth began his academic career at Arkansas Tech University where he excelled as a student, athlete and became the first ROTC commander for Arkansas Tech. It was at Arkansas Tech that Kenneth met the love of his life Nancy Graham. Nancy and Kenneth began a wonderful journey that would lead them to various college campuses and schools across the country. Kenneth began his academic career as a high school teacher in Demit, Texas and then he became the first superintendant of schools on the Navajo Indian Reservation in Chenli, Ariz. With an understanding and a love for students, Dr. Kersh pursued graduate studies at the University of Mississippi, Duke University, University of Arkansas and later in life postgraduate studies a Harvard School of Business. Kenneth Kersh was truly a renaissance man due to the fact that he dedicated over 20 years of service to the United States Army, in addition to being a lifelong academician. One of the important contributions that he made to the military was his five years of service with the U.S. Army Special Forces at Fort Bragg, N.C., where he was a green beret from 1965-1969. With his academic background, Dr. Kersh would go on to develop educational and testing systems for the Special Forces that would remain in tact for years to come. Dr. Kersh was actively involved in all levels of college teaching and administration. His college experience would include teaching and administrative positions at the Ole Miss, Pembroke State University, Duke University, Hendrix College and Arkansas Tech University. His academic career would include the full spectrum of collegiate posts. His professional collegiate career included the positions of Associate Professor, Full Professor, Department head, Academic Vice President and he completed his career as a University President at Arkansas Tech. Dr. Kersh was named the 10th President of Arkansas Tech University in 1973. Dr. Kersh would spend over 20 years at Arkansas Tech University. Over his long career at Arkansas Tech, he accomplished many great tasks. These accomplishments would insure the vitality of the University for years to come. Dr. Kersh's success at Arkansas Tech was inevitable, due to his love for students and the respect and guidance he gave to the faculty members. Dr. Kersh dearly loved people, all walks of people and it was this life's philosophy that would make him a leader that people would intern love and respect. How can one possibly summarize a life as rich and wonderful as the life of Kenneth Kersh? His life was guided by a sincere belief in kindness, understanding and a love for his fellow man. He successfully raised and loved five children and experienced a life long love affair with his wife Nancy. His presence will be dearly missed, but never forgotten. Dr. Kersh is survived by his wife Nancy; their five children, Graham and Lily Kersh, Richard and Gina Kersh, Kimberly Kersh, Georgia Kersh Nana and David Winters; grandchildren, Lauren Kersh, Jessica Kersh, Savannah Dye, Shelby Dye, Richard William Kersh, Dane Winters, Nash Winters; and by his sister Patsy Brown of Springdale, Ark. Memorial services for Dr. Kersh will be held at the All Saints Episcopal Church in Russellville, Ark. on April 1, 2011 at 11 a.m., the public is welcome to attend. Services will be officiated by Father Jos Tharakan, rector.