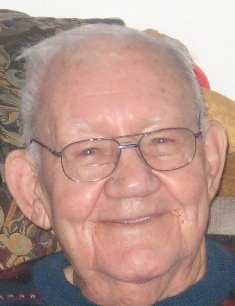 Bartholomew A. Strand, born August 23, 1923 in Dublin, Ireland, went to the Lord on March 25th, 2011 in Austin, Texas surrounded by his family. Bart and his wife, Nancy, had lived in Little Rock for over 45 years and just recently moved to Austin. Bart came to this country after traveling around the world as an Irish merchant marine. He was docked in New York City where he met and married the love of his life in 1955 and then started his family. He was employed by the Royal Globe Insurance Agency as a safety engineer and was transferred to Little Rock, Arkansas were he and his family settled in the Hillcrest area. He was an avid member of the Knights of Columbus, sat on the board of the Recovery Centers of Arkansas and for years was a very strong presence in the Irish Cultural Society. He was especially proud of being one of the first Grand Marshalls of the St. Patrick's Day parade. Bart and Nancy loved to travel and they became regulars on the Holland America Cruise Line. As soon as they would return from one trip, they would start planning their next one. Eventually, he bought a boat that he named the Irish Rover and he would invite friends and family to the Lake Maumelle Yacht Club to join them for their afternoon biscuits and tea. Having been a life long member of the Arkansas Repertory Theater, Bart always supported the performing arts. He loved a good concert and saved all his playbills. Bart would be extremely pleased if a donation in his name could be made to St. Stephen's Episcopal School in Austin, Texas (www.sstx.org) or Tapestry Dance Company in Austin, Texas. (www.tapestry.org) May the road rise to meet you May the wind be always at your back The sun shine warm upon your face, The rain fall soft upon your field ...And until we meet again, may God Hold you in the palm of His Hand. (an Irish blessing).
He is preceded in death by his parents, John and Mary Strand, his sisters Norrie and Maureen and his daughter, Sheila. He is survived by his wife of 56 years, Nancy his two daughters, Deirdre and Maureen, Acia Gray and grandchildren, Siobhan Cook, Erin Gardner, Kerry Reyes, Ryan Harrison, Maeven, Rhys, and Colin Rogers and Patsy, Jim and Catriona Coady.
Visitation will be on Wednesday evening, March 30th from 6-8 p.m. at Griffin Leggett Healey and Roth on West 12th street and the Mass and funeral will be on Thursday, March 31st at 11 a.m. at Our Lady of Holy Souls Church.