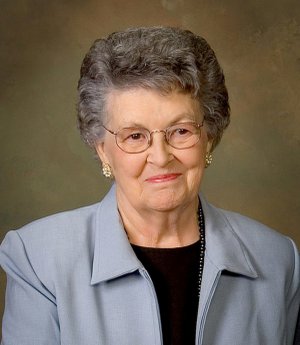 Nadine Davenport of Morrilton, died Tuesday, February 7, 2012. She was born May 16, 1925 a daughter of Otto and Jessie Fortner.
She was preceded in death by her husband of 64 years Ivy Davenport, and her brother, Ray Fortner. She is survived by two sons, Micky Davenport and wife June of Fayetteville, and Bruce Davenport and wife Joann of Morrilton; two brothers, Charles Fortner of Pindall, and Rex Fortner of Garfield; four sisters, Myrtle Lea Anderson, and Ellen Langston both of Holyrood, Kansas, Lucille Dart of Sapulpa, Oklahoma, and Judy Dart of Harrison, Arkansas; three grandsons, Eric and Melissa Davenport of Fayetteville, and their children Cody and Luke; Brian and Dianne Davenport of Farmington, Arkansas, and their children Billy, Waylon and Levi; Brent and Melissa Davenport of Fayetteville, and their children Jacob, Whit and Owen; one granddaughter, Kellie and Casey Rine of North Little Rock, and their children Isaac and Ivy; numerous nieces, nephews and a multitude of friends.
Funeral services will be 10 a.m., Friday, February 10, at the Harris Chapel with committal at 2 p.m. at Caney Cemetery near Yellville, Arkansas by Harris Funeral Home of Morrilton. The family will receive friends 6-7:30 p.m., Thursday, at the funeral home. Memorials may be made to C.U.R.E., c/o West-Ark Church of Christ, 900 Waldron Rd., Fort Smith, Arkansas 72903. Online guestbook: www.harrisfuneralhomes.net.