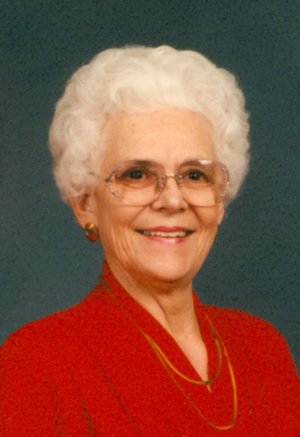 Margie Burris, 90, of Russellville, died Monday, March 25, 2013, at Legacy Heights Nursing and Rehabilitation Center. She was born August 3, 1922, at Russellville, to William LaFayette and Chloie Amanda Freeman Henderson. She was a member of First Cumberland Presbyterian Church, where she was in the Cumberland Presbyterian Women and the Women's Tuesday Quilting Club. She was a member of the Democratic Women, and worked for the election committee. She received the Rotary Paul Harris Fellow Award, and was a member of the Dames Club.
She was preceded in death by her parents and a sister, LaVerne Cole. Survivors include her husband of 68 1/2 years, Troy Burris; two daughters and sons-in-law, Vickie and Ed Stingley, and Troylynn and Roy McSpadden, all of Russellville; two grandchildren and their spouses, Stephanie and Steve Barker and Ed and Dixie McSpadden, all of Russellville; one great-grandson, Rhett Barker, four great-granddaughters, Meredith Barker, and Clara, Chloie and Anna Kay McSpadden, with one great-grandson on the way.
The memorial service will be at 2 p.m. on Thursday, March 28, 2013, at First Cumberland Presbyterian Church, officiated by the Rev. Steve Mosley. Private burial will be in Rest Haven Memorial Park, by Shinn Funeral Service of Russellville. The family will receive friends on Wednesday evening, from 4:30-6 p.m., at the funeral home. Memorials may be made to the Troy Burris Rotary Scholarship Endowment, Post Office Box 663, Russellville, Arkansas 72811. The online obituary and guestbook are available at www.shinnfuneral.com.