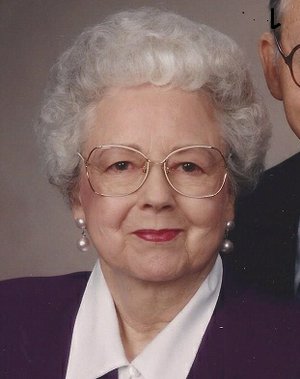 INEZ G. FARISH passed away Saturday, April 12, 2014. She was born on Aug. 10, 1923 to G.M and Zora Guiling in Cleveland, Ark. She was preceded in death by her husband, Jesse Farish with whom she celebrated their 50th wedding anniversary in 1992.
She was a graduate of Draughon School of Business and also graduated from Cosmetology School. She worked as a beautician and later for the Arkansas State Employees Retirement System. In 1985 she retired and was honored for several years of dedicated service. Inez was an active member of the American Business Women's Association and Arkansas Extension Homemakers Council.
She was a life-long member of Pulaski Heights Presbyterian Church and served as a member of their Session (board of elders). Inez devoted many hours to visiting sick and home bound members of the congregation. On many occasions she lovingly baked bread for communion services. A gift and favorite pastime of hers was sewing and knitting for children and grandchildren.
Inez is survived by her daughters Dianne Jenkins of Rogers, Ark. and Nancy Howland of Little Rock, Ark.; and three brothers, Guy, Norman, and John Guiling of Texas. Her family also includes her grandchildren, Lara Shepherd of Springdale, Ark., Brian Jenkins of Southaven, Miss. and Greg Jenkins of Bentonville, Ark.; and six great-grandchildren.
A service celebrating her life will be held on Tuesday, April 15, 2014 at 11 a.m. at Pine Crest Memorial Park with the Rev. Ruskin Falls officiating.
In lieu of flowers memorial may be made to Pulaski Heights Presbyterian Church, 4401 Woodlawn Drive, Little Rock, Ark. 72205.
Services are entrusted to Griffin Leggett Healey & Roth Funeral Home. An on-line guestbook is available at www.griffinleggetthealeyroth.com.