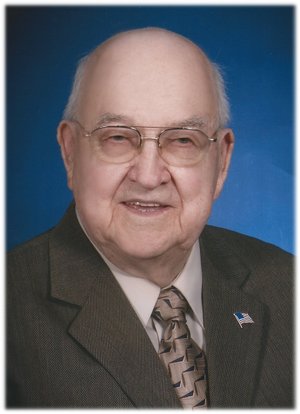 Clyde Lamoin "Bob" Tripp was born September 12, 1922 in Hector, Arkansas and raised in Malvern, Ark. Bob lost the love of his life on March 27, 2014 after 68 years and 3 months of marriage. Love is such a powerful bond, and he couldn't bear to be apart from her. God being a merciful savior, granted his wish to join her in heaven on the morning of April 23rd at the age of 91.
Bob was preceded in death by his parents, Lela Sella and Noah Scott Tripp; wife, Jessie Tripp; and son, Lamoin "Bud" Tripp. He spent 18+ years working for Brown Well Service in the oil fields in New Mexico and West Texas. Bob moved his family back to Little Rock, Ark. and retired from Sears Roebuck after 17 years in commercial sales. Bob was a WWII veteran and was honorably discharged after 2 years of service. In retirement, Bob and Jessie traveled cross country for many years. Both really enjoyed spending time with friends and meeting new people on their travels. In 1998, Bob and Jessie moved to Russellville, AR and lived there until their move to heaven's eternal home. Bob was a member of First Assembly of God in Russellville, Ark.
Cherishing his memories are his children: Sharon Wilkerson and Scott Tripp; grandchildren: Paul and Ron Wilkerson, Callie Barnett, Noah and Jessica Tripp; great grandchildren: Faith, Heidi, and Landon Wilkerson. Bob was loved by family and friends and will be truly missed. There will never be another Bob Tripp.
Visitation will be 4-6 p.m., Friday; and Funeral services will be 2 p.m., Saturday, April 26, 2014 at Roller-Drummond Funeral Home Chapel, 10900 Interstate 30, Little Rock, Arkansas 72209 (501) 455-5800 with interment to follow at Shadowlawn Cemetery in Malvern, Arkansas. Online guestbook: www.rollerfuneralhomes.com/drummond.