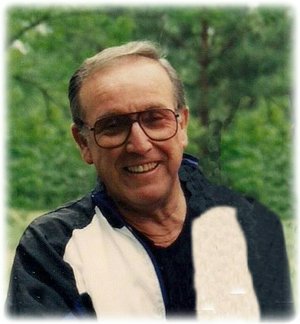 William Kenneth (Ken) Stewart gently and peacefully passed from his earthly life in the arms of his daughter and grandson on August 13, 2014. He was born February 16, 1929 to Drew C. and Fannie D. Stewart.
He graduated from Greenbrier High School where he was a star basketball player. He is a veteran of the U.S. Navy, serving from 1948-1952 during the Korean Conflict. In June 1953 he married Jo Lynn Alford. From this union he is survived by his daughter, Sherri Lynne Stewart of Mountain View and grandson, Gavin Forrest Stewart of Greenbrier. He worked as a foreman at International Shoe Company, owned and operated Greenbrier Esso station and when Toad Suck Lock and Dam was built he was trained and hired as one of the first operators for the U.S. Army Corps of Engineers. After retirement he managed and co-owned Cadron Valley Country Club. His hobbies included included bowling, waterskiing, fishing, thoroughbred horses, golfing, and supporting the UCA Bears and the Razorbacks.
In 1982 he married Joanie Rawls Stewart and from that union he is survived by bonus family, Sheri Lowry, her husband, Troy and their son Landon, and Michelle Bishop and her children, Miranda, Reynolds, Ian Bishop and Garrett Bishop. He was preceded in death by his parents, his wives, a step-granddaughter, Kristin Jones, and his four legged friend, Jessie.
We wish to thank the staffs of Stone County Nursing Center and Legacy Hospice for the love and care they provided during these later years as our dad struggled with the disabilities of a stroke. He is no longer suffering and we take joy in knowing he is teeing off with the angels on Heavens' back nine.
Please join us in celebration of the life of a wonderful man for a visitation Saturday, August 16, 2014 from 10 a.m. to 12 noon at Roller-McNutt Funeral Home in Greenbrier, with a Graveside Service following at Thorn Cemetery, with Rev. Teri Daily officiatiing. Serving as pallbearers will be Larry Dickens, Stanley Russ, Mark Johnson, Gary Harrington, Louis Stell, and Roy Montgomery. In lieu of flowers we ask that you make a donation in his name to: Out of the Woods Animal Rescue at ootwrescue.org; Humane Society of Faulkner County, P.O. Box 1055 Conway, AR 72033 or the Scottish Heritage Program, Lyon College, P.O. Box 2317, Batesville, Ark. 72503. Online guest book: www.rollerfuneralhomes.com.