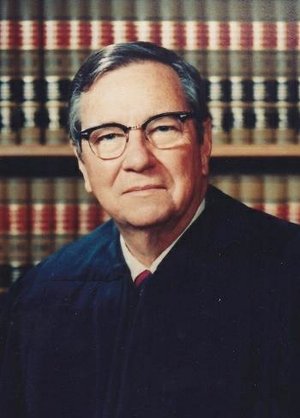 Judge William Albright Culpepper, age 99, died Sunday, October 4, 2015 in Little Rock, Arkansas with his family by his side. He was born July 22, 1916 in Alexandria, Louisiana the second child of Judge Robert and Margarete Culpepper. One of his fondest childhood memories was summers spent at the family camp in Fishville, Louisiana.
He graduated from Tulane Law School in 1939 and practiced law for many years before becoming a District Court Judge. He later served twenty two years on the Third Circuit of Appeals for the state of Louisiana. He served in the United States Marine Corp during World War II and saw active duty in the South Pacific for three years. He was awarded the Bronze Star and retired with the rank of Brigadier General.
During his life he was very active in community and church affairs. He was an active member of St. James Episcopal Church and a charter member and senior warden of St. Timothy's Episcopal, both in Alexandria, Louisiana. At the time of his death he was a member of St. Mark's Episcopal in Little Rock. Judge Culpepper was the first Campaign Chair and President of the United Way of Alexandria-Pineville, President of the Attakapas Council, Boy Scouts of America, Chairman of the Charter Commission which drafted the Home Rule Charter for the City of Alexandria, and recipient of the Civic Oscar presented by the Alexandria Daily Town Talk. His hobbies included fishing hunting and playing golf.
Speaking on his 99th birthday, he reminded his children, grandchildren and great-grandchildren, that nothing you do in life matters more than love of God and love of family.
He was preceded in death by his parents, his sister, Mamie and his wife of 59 years, Thelma Polk Culpepper. Survivors include his wife, Jane Ann Foote Jarrell Culpepper; his brother, Dr. Robert Culpepper; three children, Bill (Barbara) Culpepper, Rev. Polk (Cathy) Culpepper and Mallory (David) Marsh; six grandchildren; Kyle (Karen) Culpepper, William (Jaimee) Culpepper, Adele (Lee) Jackson, Riffee Culpepper, Courtney (Quinton) Harris, Ben (Louise) Cashion; and ten great-grandchildren.
The family would like to thank the staffs at Fox Ridge Chenal and Briarwood Nursing and Rehabilitation for the excellent care and genuine compassion they showed. A memorial service will be held at St. James Episcopal Church in Alexandria, Louisiana on Saturday, October 24, 2015 at 10 a.m. At his request in lieu of flowers memorials may be made to St. Mark's Episcopal Church, 1000 North Mississippi St., Little Rock, Arkansas 72207. Arrangements by Ruebel Funeral Home, www.ruebelfuneralhome.com.