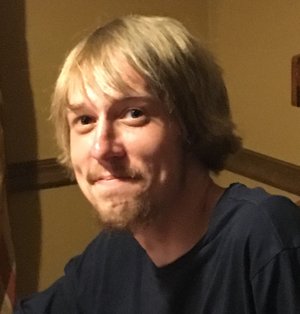 Nicholas Alexander Kellar, age 23, of Little Rock, died of an accidental overdose on Friday, April 14, 2017, following a long, hard battle with addiction. He was born January 7, 1994 at Fort Gordon, Georgia. He was the son of Rory and Suzanne Tipton. He attended Arkansas Baptist High School until transferring to Maumelle High School for his senior year. He was baptized at Geyer Springs First Baptist. He was only 23 years old and should have had a long life adventure ahead of him. We write this not to dishonor his memory, but to shine a light on this epidemic that is ruining so many young adult lives.
Nicholas was unconditionally loved by his family. He was a sweet young man and once you knew him, you would never forget him. Outwardly he looked like he had it all; intelligence, love, talent, beautiful brown eyes and blonde hair. His smile that people smile with him. He was fun, had well thought out opinions, and could match wits with anyone. His fashion sense was definitely unique, but he enjoyed his wild shoes and endless collection of flat billed hats. Inwardly, however, Nicholas was fighting deep depression and dealt with pain, fatigue and repeated illness brought on by an immunity disorder. We loved him with all our hearts, but it was not enough to protect him from this world.
He had the potential to accomplish anything he wanted, but drugs crept into his life around the age of 15. Around the same time, he was diagnosed with an immune disorder that resulted in repeated illnesses and required frequent antibody infusions. Once the patterns of drug abuse emerged, we tried everything we knew to help him. Nicholas fought hard to beat his addiction, but I am not sure that even he understood the internal demons that were beating him down. He did know that his family and friends would do (and did) anything that might help including hospitalization, rehab, counseling, and finally suboxone treatment.
For two years, it appeared the battle was won and we again had our beautiful, smart, sweet, funny, and loving son that liked twisted movies, music, engaging with others and enjoyed life. He was figuring out what he wanted to do in this life and was working on a business degree at Pulaski Tech. He was looking forward to our next ski trip (he loved snowboarding).
Unfortunately, relapse rates with opioids are extremely high and deadly. That addiction, along with depression, was more than he could overcome. Understand, this addiction is NOT who Nicholas was, but it is a disease that people need to know about and fight. He was our son, grandson, brother, and our life – and he mattered.
Instead of an ambiguous "died suddenly at home" we opted for openness by honestly saying "died of an accidental overdose" in order to publicly expose the demon and disease of addiction that will continue to hit so many families.
I struggle with understanding God's purpose in the death of my beautiful son, but maybe if even one person is positively affected by his story then this unbearable loss will make more sense.
Nicholas leaves behind, his mother, Suzanne L. Tipton and his father, Rory A. Tipton both of Little Rock; his brother, Blake Tipton of Fayetteville; his maternal grandparents, Glen and Sandra Vantrease of Maumelle; and his great-grandmother, Dallas Schadt of Grovetown, Ga. He is also survived by his uncle, Edward Moody of Kansas, his great-uncle, David Schadt of Grovetown, Ga.; his great-uncle, K.T. Dolan and family of Maryland; his aunt, Renee Wichmann and uncle Dave of Ft. Mill, S.C.; cousin, Jessica Wichmann of Ft. Mill, S.C.; and numerous others that loved him. Nicholas is preceded in death by his grandparents, Bill and Jenera Tipton of Sherwood.
Visitation will be Thursday, April 20, 2017, from 6 p.m. – 8 p.m. at Roller-Chenal Funeral Home, 13801 Chenal Pkwy. in Little Rock. Memorial Service will be on Friday, April 21, 2017 at 1 p.m. at Geyer Springs First Baptist Church, 12400 I-30 in Little Rock. Burial will follow at Riverwood Memorial Gardens in Maumelle. Online guestbook: www.rollerfuneralhomes.com/chenal.