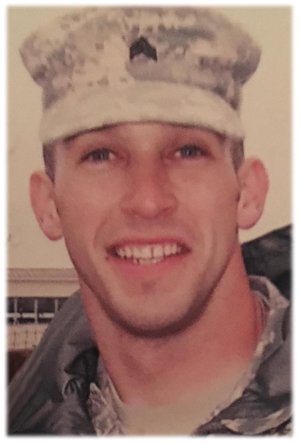 Joseph Louis "Joey" Fantinel, 36, of Springdale, died Monday, July 31, 2017 at his home. He was born Dec. 13, 1980 in Conway to Jerome and the late Lynne Goucher Fantinel. Joey was an Army veteran and served two deployments in Iraq and one in Afghanistan. He was admired and loved by his family and his brothers and sisters at arms. Joey was a proud patriot who loved his country. He attended the University of Arkansas and was a doctoral candidate for computer science and engineering at the time of his death. He is survived by his son, Ethan Fantinel of Springdale; his father, Jerome Fantinel and wife Barbara of Tontitown; two brothers, Jerry Fantinel of Huntsville, Jim Fantinel of Rogers; and two sisters, Whitney Fantinel and Megan Fantinel both of Tontitown. In addition to his mother he was preceded in death by a sister, Jacque Fantinel. A Mass of Christian Burial will be 10 a.m. Friday, Aug. 11, at St. Raphael Catholic Church. Interment with military honors will be at Bluff Cemetery. Memorial contributions for his son's benefit may be made to The Ethan Fantinel Memorial Fund in care of Signature bank or to St. Jude Children's Hospital.fund for his son is being established. Arrangements are with Heritage Funeral Home, online guestbook at www.heritageofnwa.com.