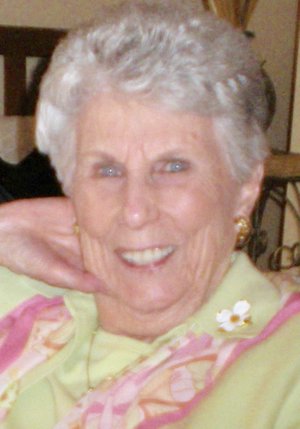 Anne Bourne Vandergriff, age 97, of Fayetteville passed away Saturday, March 30, 2019 at Butterfield Trail Village. She was born September 11, 1921 in Van Buren, Arkansas. She was preceded in death by her parents, three brothers, and her husband of 68 years, Harry Vandergriff.
Anne graduated from the University of Arkansas with a bachelor's degree in education and a Master's degree in Library Science. Anne was a teacher for the Fayetteville School District. First as a fourth-grade teacher at Washington Elementary School and later as the first elementary librarian for the district at Root Elementary School. She was a long-time member of the First United Presbyterian Church where she had served as an elder and was active in the women's organization. Anne was a charter member of the Fayetteville Junior Civic League where she served as president and was active on several committees. She was also a volunteer for the Community Emergency Outreach from its inception.
Anne is survived by her daughter Marcia Morris (Michael) of Fayetteville and four granddaughters, Van Morris of Texarkana, Arkansas, Whitney Myers (Zachary) of Bastrop, Texas, Meredith Shaddox (Jonathan) of Fayetteville, and Kate Morris of San Antonio, Texas. She has eight great-grandchildren and two great-great-grandchildren, her brother and sister-in-law, Bob and Betty Vandergriff of Van Buren, and many nieces and nephews.
Anne's family would like to thank the staff of Butterfield Trail Village, Washington Regional Hospice, and her companions, Shella Shultz, Kim Gulledge, and, especially, Pat Barnes for the love and care given to her.
A memorial service will be held April 22, 2019, at 11 a.m. at First United Presbyterian Church, 695 E. Calvin Street, Fayetteville, Arkansas 72703.
In lieu of flowers, memorials can be made to Vandergriff Elementary School, 2200 Vandergriff Lane, Fayetteville, Arkansas 72703 or Fayetteville Public Education Foundation, 877 W Clinton Dr, Fayetteville, Arkansas, 72701, and First United Presbyterian Church, 695 E. Calvin Street, Fayetteville, Arkansas 72703.
To place an online tribute, visit www.mooresfuneralchapel.com.