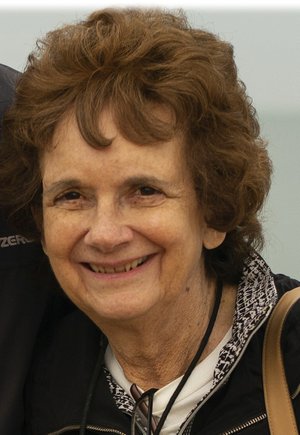 Ellen Sikes Johnson was born on November 23, 1941, in San Angelo, Texas, and peacefully passed away at home in Conway, Ark., on April 15, 2019. She was preceded in death by her parents, Elizabeth Canon Sikes and Peter Radford Sikes, as well as nephew, Warren Clint Wills and brother-in-law Raymond Madison Wills. She is survived by her loving husband, W. Clint Johnson, children David, Craig (Kristyn) and Susan Johnson-Mumford (Chris), and also grandchildren, Sydney, Emery and Ansley; sister Susan Sikes Wills and niece Mary Liz Brooks (Jason) and their children, Lauren and Colin.
Ellen earned a Bachelor's Degree in Elementary Education at the University of Texas at Austin in 1964, followed by teaching second grade at Eanes Elementary School from 1964-1966 in Austin. She dedicated herself to full-time parenting and local community and church initiatives in Texas, Tennessee, and Arkansas between 1967-1987. In 1981, she achieved a Master of Library Science at Vanderbilt University in Nashville, Tenn.
She was passionate about reading and achieved her ambition of becoming a librarian when she joined the University of Central Arkansas's library staff in 1987. She served first as head of the Circulation Department, then as a reference librarian and children's librarian. In the latter role, she developed a free-standing children's library at Torreyson Library at UCA, embodying many intriguing features that displayed a love of books and children.
Ellen was a member of the Arkansas Library Association, the Southeastern Library Association and the American Library Association. She had the distinction of being one of 18 persons nationally elected in 2003 to the Council of the American Library Association, serving 2 three-years terms as National Councilor. Later she was the Arkansas Councilor on the ALA Council. Ellen was a founding member of the Intellectual Freedom Committee of the American Library Association. Representing the Arkansas Library Association, she conducted school workshops throughout the state on freedom to read. She helped many schools as well as individual teachers navigate the treacherous waters of challenges to books in school libraries. She also received the Francis P. Neal Award in 2007 from the Arkansas Library Association in recognition of her notable service to librarianship in the State of Arkansas. Ellen retired from Torreyson Library in 2007 after the birth of her first grandchild while remaining active in professional librarian circles.
For almost 40 years she was a member of First United Methodist Church in Conway, where she taught Sunday School and Vacation Bible School. Ellen was also a member of Chapter CA P.E.O., American Association of University Women, Shakespeare Club and the Women's Investment Network. In addition, she served as President of UCA Faculty Women, was a member of the Conway Morning Rotary Club and held the role of Webelos Den Mother.
Later in life, Ellen loved being a grandmother and always looked forward to when her granddaughters could spend time with their "Mimi". She was known for her loving, nurturing, and selfless nature. Her children remember her for her calm spirit and and ability to provide reassurance at any time. Some of the things for which she is most remembered are her values of honesty, seeing the best in others, commitment to doing good in all that she did and unconditional love.
A service of remembrance will be held at First United Methodist Church in Conway, Ark., at 2 p.m. on Tuesday, April 23rd. In lieu of flowers, donations may be made to the First United Methodist Church in Conway, the Faulkner County Humane Society or the Freedom to Read Foundation (ftrf.org).