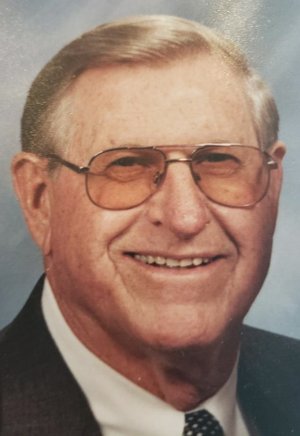 Eldon Thomas Dingler, 87, passed away August 8, 2019. Eldon was the 2nd of 4 children born to Luther & Blanche Dingler. His brothers, Glenn and Doyce, and sister, Euvice, are still with us today and doing well.
Eldon grew up in the small town of Kirby, Arkansas on a farm where the motto was "we eat what we grow and raise." Born at home, into a family with very little means, Eldon & his brothers and sister went on to lead very productive lives with deep Family & Christian ties.
After graduation from Kirby High School, Eldon did as many did in the day, joined the U.S. Navy and became a Veteran of the Korean War. Upon completion of his commitment to the country, Eldon returned to Arkansas and enrolled at Henderson State University. It was here where he met his wife, Diane, and received his Degree in Economics.
Eldon married Diane on June 20, 1959. They have two children, Tom & Brett; grandchildren, Evans, Drew, Brooke & Logan; & great-grandchildren, Emery & Oliver.
After Graduation from HSU and getting married, Eldon & Diane moved to Little Rock where Eldon joined the Administrative team at St. Vincent Infirmary Medical Center as a staff accountant. After a lengthy & very distinguished career with SVI, Eldon retired after 30 years as the Chief Financial Officer & Interim CEO.
After Eldon & Diane retired, they spent the next 20 years traveling all over the world, which was a lifelong dream. Their love was being around their children and grandchildren, treating them to nice family vacations at the beach.
Eldon & Diane were members of Lakewood Methodist Church, where Eldon served on numerous committees for over 40 years and formed lifetime bonds & friendships. He was also a founding member of the Little Rock Executive Association where he served as President and to this day is an honorary lifelong member.
The family would like to invite everyone out for visitation at Smith North Little Rock Funeral Home on Monday, August 12th from 5-7 p.m. A Memorial Service celebrating Eldon's life will be held at Smith NLR Funeral Home on Tuesday, August 13 beginning at 11 a.m. A private family burial will be held following the memorial. Services will be held by Dr. Luke Conway & Dr. Harold Mitchell. Memorials may be made in Eldon's name to Lakewood Methodist Church or to Alzheimer's Arkansas. Online guestbook at www.smithfamilycares.com.