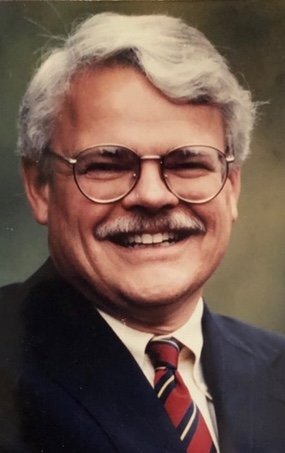 A celebration of John Hugh Churchill's life will be held Saturday, November 23rd at 11 a.m. in the Greene Chapel at Hendrix College in Conway, Arkansas. A reception will follow at the Mills Library. Interment will be at Walnut Grove Cemetery, east of Hector, Arkansas. In lieu of flowers, memorials should be directed to Hendrix College, Conway, Arkansas.
John Hugh Churchill, a resident of Dickson, Tennessee, died November 16, 2019 in Nashville, Tennessee. He was the son of Olen R. Churchill and Mary Josephine Cheek Churchill of Little Rock, Arkansas, both of whom predeceased him. He is survived by his wife, Jean Hill Churchill, of Dickson, Tennessee, son William H. Churchill of Nashville (Emily), daughter Mary Katherine Churchill Curcio (Michael), of Dickson, son Hugh O.H. Churchill (Gwen), of Fayetteville, Arkansas, sister Betty J. Churchill of Chattanooga, brother Larry R. Churchill (Sande) of Nashville, Tennessee, and grandchildren Rosalind, Churchill, Edward, Margot, Timothy, Josephine, Emmett, and Theodore. Churchill retired in 2016 as national Secretary (CEO) of the Phi Beta Kappa Society, based in Washington, D.C., a post he held for fifteen years. Prior to that he served for seventeen years as Vice President for Academic Affairs and Dean of the College at Hendrix College in Conway, Arkansas, including two stints as Interim President. In 1983-84 he was Dean of Students, and throughout his 24-year tenure at the College he taught Philosophy, ending his time there as Professor of Philosophy. He held a B.A. from Rhodes College, Memphis, a second B.A. and an M.A. from the University of Oxford as a Rhodes Scholar, and a Ph.D. from Yale. A member of the Society for Philosophy of Religion, he published widely in that field as well as in the philosophy of liberal education.
A polymath in a specialized age, Churchill was not only a philosopher and champion of the liberal arts, but also a collector of rocks, decorated athlete, friend of trees, humorous essayist and storyteller, and an enthusiastic horticulturist and cook. Churchill played Guard on the Arkansas champion Hall High School football team in 1967. At Rhodes he captained the varsity football team, was conference champion in the discus, and was later inducted into the Rhodes College Athletic Hall of Fame. In 1980, his pickled okra earned a blue ribbon at the Faulkner County Fair.
Arrangements by the Taylor Funeral Home, Dickson, TN (615) 446-2808, TaylorSince1909.com