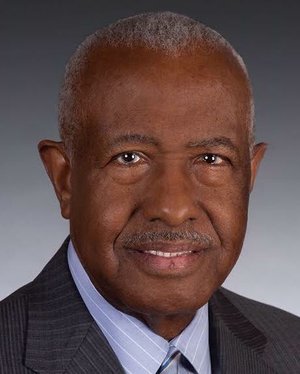 Civil Rights Attorney and Arkansas State Representative John Winfred Walker was born June 3, 1937 in Hope, Arkansas.
Walker attended Yerger High School in Hope, Ark. until 1952 and continued his education at Jack Yates High School in Houston, Texas where he graduated in 1954. He was the first African American undergraduate student admitted to the University of Texas after the Brown decision in 1954 but was not allowed to attend for racial reasons. He entered Arkansas AM&N in 1954 graduating in 1958 with a degree in Sociology. He had the honor of having Rev. Martin Luther King, Jr., witness his graduation. In 1961 he received a master's degree from New York University; and in 1964 he received a law degree from Yale University in New Haven, Connecticut. Walker's first work was as an attorney with the NAACP Legal Defense Fund (LDF) in New York. He has remained associated as a cooperating attorney and later as a member of the Board of LDF. (He served in that capacity longer than any previous individual.)
Walker began the general practice of law in Little Rock, Arkansas with the emphasis on civil rights. In 1968, he opened one of the first three racially integrated law firms in the south, first known as Walker and Chachkin. Between 1965 and now, Walker has personally been involved in most of the reported cases which involve racial discrimination in the state of Arkansas. Many of them are landmark having created new law and opened doors to schoolhouses and workplaces throughout the state of Arkansas and surrounding states. His cases have been cited in State and Federal publications. One case has continued to take his time since 1965, the Little Rock school case started by the late Wiley Branton and LDF general counsel/later Supreme Court Justice Thurgood Marshall. Many of Walker s early cases involved classes of people discriminated against due to their race in mega corporate environments. A recent case of Walker's was the only nationwide racial discrimination case ever successfully prosecuted against Wal-Mart. It involved a class of African American truck drivers.
Since 2011 Walker has been a Democratic member of the Arkansas House of Representatives representing District 34.
Attorney Walker was a devoted member of Wesley United Methodist Church for over 50 years. He died at his home early Monday October 28, 2019.
He is survived by his children; Pamela J. Walker of Nashville, Tenn., Dr. Patricia Newberry (Dr. Huey) of Nashville, Tenn., John W. Walker, Jr., of Little Rock, Ark., Murray Walker of Nashville, Tenn., Esther Walker Bullard (Kevin) of Rancho Cucamonga, Calif., a devoted sister, Marva Walker Smith of Little Rock, Ark., 13 grandchildren, nine great-grandchildren; and a special friend, Vickie Hale; and a host cousins and extended family.
Attorney Walker will lie in state from 11 a.m. to 2 p.m. at the Arkansas State Capitol rotunda, on Thursday, October 31, 2019. There will be a family hour on Thursday, October 31, 2019, at Wesley Chapel 1109 South State Street, from 6 p.m. to 8 p.m.
Funeral services will be held at 11 a.m., on Friday, November 1, 2019 at St. Mark Baptist Church, 5722 West 12th Street, Little Rock, Ark. 72204. There will be a viewing 9 a.m to 10:45 a.m. prior to the service at St. Mark. Arrangements by Ruffin & Jarrett Funeral Home, 1200 Chester Street, Little Rock, Ark. 72202. (501) 372-1305.