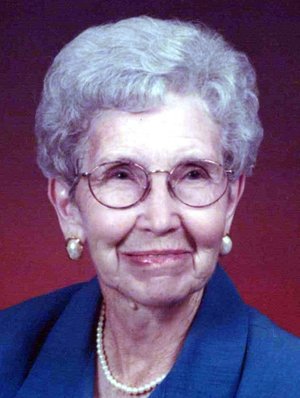 Ida Maxine Walters was born January 22, 1922 to William and Myrtle Campbell and she died April 14, 2020 at her home in Hickory Plains, Ark. She married Guy Walters New Year's Day, 1938 and lived as a widow after his death on October 25, 1999. She retired from Remington Arms in 1985 and spent a lifetime tending to her garden and flowers and family with a lot of love.
She was preceded in death by her parents and husband, as well as her sisters, Geneva Campbell and Wayne Carlisle; brothers, Laborn ‘Buck" Campbell, Dale Campbell and Ray Campbell; son-in-law, Sidney White; great grandsons, Nicklaus Henson and Blake Wilson, and grandson-in-law, David Woosley.
She is survived by six children; daughters Elizabeth White of Beebe, Barbara (Charles) Miller of Hobbs, New Mexico, and Carolyn Sure (Larry)Anderson of Lonoke; sons, Bill (Betty) Walters of Ward, John (Alice) Walters of Bee Branch, and Gary (Margaret) Walters of Ward; as well as 21 grandchildren, 44 great-grandchildren, and 16 great-great-grandchildren.
The family would like to thank special friend Edna Gunter, as well as Arkansas Hospice for the wonderful care. Burial will be a private graveside service, and a Celebration of Life will be scheduled once the COVID-19 pandemic is no longer a threat. In lieu of flowers, memorials may be made to Hickory Plains Missionary Baptist Church. Arrangements by Smith-Westbrook Funeral Home. www.SmithFamilyCares.com.