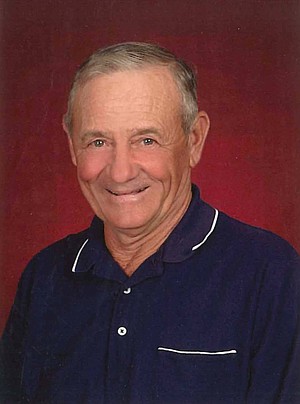 On July 30, 2020, Conrad John Gunther Sr., 84, of Houston, Ark., passed away peacefully at home surrounded by his family after a long battle with Alzeheimer's. He was born October 3, 1935 in Bigelow, Ark. He is the oldest son of ten children born to the late Marie Grabher Gunther and the late John A. Gunther of Bigelow, Ark. Conrad was a lifelong member of St. Boniface Catholic Church, New Dixie. He served his church, community and fellow farmers and ranchers in many ways, including being a charter member of Knights of Columbus Council 6680, Grand Knight, Arkansas State Knight of the Year 1991, and Knight of 4th degree. He served 18 years on the school board for East End School District in Bigelow, served on the Arkansas Farm Bureau Board, Farmers Co-Op Board, Soil Conservation Committee, and was a member of the Arkansas Cattlemen's Association. He served his country for eleven years in the Army National Guard. He was a dedicated son, husband, father, brother, Papa and Great Papa. His greatest love, other than family, was farming, ranching, driving tractors, and caring for the animals. He led by example in his faith, the importance of family, and the rewards of a diligent work ethic, all with a twinkle in his eye and a little humor. He was often lovingly nicknamed "Doc" because it was known by all that he could "fix anything" with duct tape or baling wire. A special thank you to the nurses and staff at Kindred Hospice, especially Holly Gregg, Caradee Trejo, and Payton Parks, as well as all of our helpers for the loving care they provided. A huge debt of gratitude also goes out to our very special CNA and friend, Rebecca Martin, who has loved and cared for Daddy just like family.