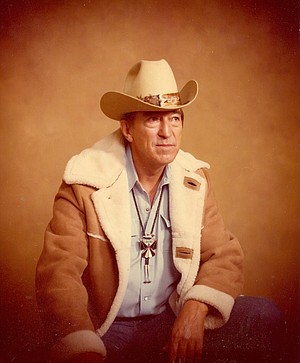 FRANK HERBERT NELSON, 93 of North Little Rock, Ark. – also known as "Pepaw","Bank", "Big Buck", "Coach" and "Chief", went to meet his Lord and Savior, Wednesday, August 12th, 2020 in Fayetteville, Ark. He was born February 10, 1927 to Herbert and Mary E. Nelson.
Frank grew up in the hills of Cushman, Ark. He graduated from Batesville High School and joined the U.S. Navy on February 8th, 1945 where he proudly served in the Philippines during World War II. When he returned from service, he attended Arkansas Tech University in Russellville on a full athletic scholarship. He was the point guard for the Wonder Boy basketball team that compiled a record of 103-25 during his playing years and won AIC National Championships in both 1948 and 1949. He also lettered in track and field all four years at Tech, and was so proud to be a Wonder Boy. He continued to be actively involved in Booster Club and many other events on campus throughout his life, as well as being inducted into The Arkansas Tech's Athletic Hall of Fame, the T Club. Tech is also where he met and married Lois Nell Henry of Siloam Springs, Ark. Together they had three daughters: Andrea, Teresa and Susan. They were the "Light" of his life. Frank and Lois were married for 45 years before her passing.
After graduating from Arkansas Tech, Frank and Lois moved to Piggott, Ark., and then Siloam Springs where he served as Head Football Coach for both high schools until 1962. While coaching in Siloam Springs, he received his Master's Degree in Education Administration from the University of Arkansas.
Moving on from his coaching career, Frank started a real estate and insurance company in Siloam Springs. In the early 60's he ran for State Senate in Benton County on the Republican ticket and was narrowly defeated despite campaigning through many small towns from the bed of an old pick-up truck with nothing but a bullhorn and his infectious personality. As his three daughters grew older, he started his own "wildcat" oil and gas company, FHN Energy, operating in South Texas and Mexico. By this time, he had traded in his athletic shoes and whistle for custom-made boots and a Cowboy hat.
Frank's top priority was his family. He loved Lois, Andrea, Teresa and Susan with an unrelenting passion. Later in his life, that love grew to include the grandchildren and great-grandchildren as well as his sons-in-law Vic, Lon and Jim as well as the entire extended family. He was an example of a strong Christian man. He was a Prayer Warrior. He began each day reading the Bible and praying. He called out each family member's name with a specific prayer. He also kept very meticulous calendars of family events, achievements and moments that were precious to him. He loved unconditionally (Although, he would certainly let you know if he thought you were making a poor decision). He was kind, generous and thoughtful. He had a great sense of humor, always had a joke to tell and didn't miss an opportunity to sing a Country and Western song or his signature number The Green, Green Grass of Home.
After Lois Nell's passing, Frank was determined to not let his family suffer and became the rock of his family. He was present for births, birthday parties, athletic events, dance recitals, vacations, hunting and fishing trips and graduations. Everyone loved him. He had countless friends and associates throughout his exceptional life including, his best friend of the last 26 years, Dana Stroud of North Little Rock, his thoughtful and caring neighbor from across the street to whom our family will always be grateful.
He is survived by his three daughters: Andrea and Victor Siroonian, Teresa and Jim Huson, and Susan and Lon Cearley; three granddaughters: Robin and Steve Sutton, Heather Gladd, and April and Shawn Hansen; three grandsons: Frank Nelson and Betsey Huson, Matthew and Melanie Huson, and Chad and Carrie Cearley; great- grandchildren: Shelby Gladd, Sydney Gladd, Levi Gladd, Stephen Sutton, Lillie Bullington, Mary Catherine Sutton, Caroline Sutton, Landon Hansen, J.R. Huson, and Halee Huson.
Honorary pallbearers are Victor Siroonian, Jim Huson, Lon Cearley, Frank Nelson Huson, Matthew Huson, Chad Cearley, Steve Sutton, Stephen Sutton, and Garland Allison.
We will all feel the void of losing someone we all loved so much. He will be thought of every day in all of the wonderful memories we share.
A private military service was held on August 14, 2020. To sign the online guestbook, please visit www.wassonfuneralhome.com. Arrangements are by Wasson Funeral Home in Siloam Springs.