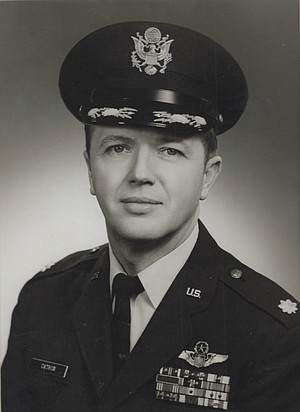 Walter "Bud" L. Catron passed away peacefully at Circle of Life Hospice in Springdale, Ark., on December 13, 2020. Going back to October 26, 1930 in Culpepper, Virginia - Walter and Thelma Hagy Catron welcomed their only son Walter L. Catron. Although Walter was his legal name, everyone knew him as Buddy or Bud for short. The reason behind this nickname was because Bud never met a stranger, only new friends. Growing up, his best friend was always his sister, Mary Hagy Yowell, who he adored. Bud spent most of his early years playing sports and representing his high school, the Culpeper Blue Devils. He put his athletic ability on display from the basketball court to the football and baseball fields. Story has it that Bud and a couple of his friends had the opportunity to try out for the New York Giants. After meeting members of baseball royalty, he decided to focus on his education instead. He attended Randolphmacon University on a football scholarship. It was here that he realized his true calling and passion was flying and left to join the Air Force. After basic training Bud was transferred to Nelms Air Force base in Las Vegas, NV. It was in Las Vegas where a glass of milk would change his future and help him meet his stunning wife Marian Hall. After a beautiful wedding and a few transfers later, Bud and Marian welcomed to their family two daughters, Dawn and Dina Catron. He accomplished his dream of becoming a fighter pilot and flying all over the world. In true Bud fashion, this came with plenty of laughs along the way. From accidentally dying a friend's house with blue paper elephants to low flying over a commander's dinner, he loved nothing more than a good prank and an even better laugh. He fought in both the Korean and Vietnam wars during his time in service. Bud had an outstanding 24-year military career and retired as a Full Bird Colonel. Retirement didn't last long after a move to Tulsa, Okla., where he became the Director of Administrative Services for TK International. Following that position, he became the General Manager for Aero Tech United which later became Nordam. Finally taking retirement seriously, Bud ended up settling down in Fayetteville, Ark., where his days were filled with golfing, traveling, military reunions, the occasional prank, and most importantly his family. Bud always said he wondered how a small-town boy grew up to travel all over the world. He created this wonderful life out of love, laughter, and family.
He leaves behind to honor his memory daughters Dawn Nowlin and Dina Trimble; son-in-laws Bill Nowlin and Joe Trimble; grandchildren Nicole and Katy Nowlin and Georgia and Will Trimble; nephew Bill Yowell and nieces Holly Yowell Kilby and Jill Stapleton. Due to COVID-19 there will be a private graveside service for just family. Arrangements are being made by Moore's Chapel in Fayetteville. In lieu of flowers, a memorial contribution may be made to the Circle of Life, Earlene Howard Hospice Home, 901 Jones Road, Springdale, Ark., 72762.