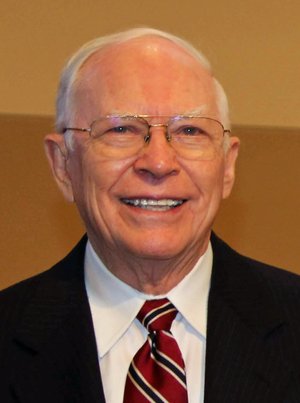 Arlee Ervin Pollard, M.D., age 90, of Little Rock, Arkansas, died on February 12, 2020. He was born June 24, 1929, at Union Hill (Independence County), Arkansas, the youngest child of Joseph Franklin and Beulah Ann Scantlin Pollard. Arlee was raised on the family farm, along with seven brothers and sisters. His early education started in a one-room schoolhouse and progressed to Oil Trough High School where he graduated as valedictorian of the class of 1946. At Arkansas Tech in Russellville, he met his college sweetheart Helen Jane Cowan. They were married on November 9, 1950, and were together 55 years until her death in 2006.

Arlee graduated from the University of Arkansas in 1950 with a Bachelor of Science degree. He received his M.D. degree from the University of Arkansas School of Medicine in 1956 and completed his residency in anesthesiology there in 1959. He was board certified in anesthesiology and was a past president of the Arkansas Society of Anesthesiologists. A dedicated and caring physician, he practiced for 35 years before retiring from St. Vincent Infirmary in 1994.

Following his retirement, he enjoyed taking a variety of classes at UALR, while also completing the requirements for becoming a Master Gardener. He loved the practice of medicine and welcomed the opportunity to resume patient care by working part-time at the St. Vincent Community Free Clinic and the Federal Occupational Health Care Unit. He also worked with a group of other retired physicians for 20 years at the Military Entrance Processing Station in Little Rock, retiring from that position in 2018. He taught Sunday school for many years, and he was a member of St. James United Methodist Church.

Being a dedicated father of four helped to prepare him for his next role, as a grandfather. Becoming "Granddad" to Kimberly and "Gaga" to David and Laura was one of his greatest joys, and he was actively involved in their lives. He is remembered by his grandchildren for lovingly sharing his knowledge, often with detailed drawings and lengthy explanations. He supported their various activities, took great pleasure in their achievements, and encouraged them in their educational pursuits.

A memorial service will be held at 10 a.m. on Saturday, February 15, 2020, at St. James United Methodist Church in Little Rock with Reverend Claire Caldwell officiating. Private interment will follow at Oakland Cemetery in Russellville, Arkansas. Arrangements are under the direction of Humphrey Funeral Service. Memorials may be made to St. James United Methodist Church, 321 Pleasant Valley Drive, Little Rock, 72212, or to a favorite charity.