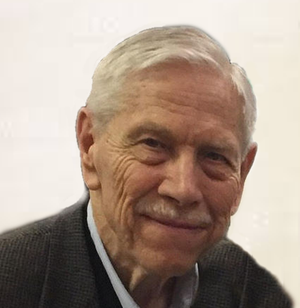 DONALD CLARENCE WOLD was born in Fargo, N.D. on September 24, 1933, the son of Clarence and Emma Wold. He graduated from high school in LaFarge, Wis., as valedictorian of the class. He was on the school basketball team, enjoyed swimming in the Kickapoo River, played clarinet in the band which his father directed, and was confirmed in the Methodist Church.
In 1951 he enrolled at the University of Wisconsin in Madison, planning to study engineering. He discovered that physics was more interesting, so that became his major. A highlight of his sophomore year was marching in the Rose Bowl parade with the UW marching band. He graduated with a B.A. in physics in June 1955 and started work on his master's degree, also working as teaching assistant and research assistant with Dr. W. F. "Jack" Fry.
On June 11, 1956, he married Shelley Thurman, a graduate student in library science, whom he had met at the Methodist Student Center. They both completed their master's degrees the following year and embarked on a new venture. Don was interested in teaching physics overseas, and learned that the Methodist Church was sending college teachers to various countries. A position opened up at Forman Christian College in Lahore, Pakistan, so in 1957 Don and Shelley began training for that overseas post. They spent a semester at Hartford Seminary Foundation , and on Valentine's Day 1958, set sail for Pakistan.
Don worked at F.C. College for five years, and was head of the Physics Department there from 1961-63. He was also involved with the Board of Studies which set curriculum for all the colleges affiliated with the University of the Panjab. And he engaged in research with a physicist at the Pakistan Council of Scientific and Industrial Research.
In 1963 Don and Shelley returned to the U.S. with their two young children. In the next five years he completed work for a PhD in physics. After a year of postdoctoral work with Dr. Steve Moskowski at UCLA, he accepted a position in Little Rock, where Little Rock University was being incorporated into the state university system as UALR. He taught physics there from 1969 to 2000. His favorite class to teach was Musical Acoustics. He served on the Faculty Senate and on many University committees. In 1970 the Physics Department acquired a Van de Graaff nuclear accelerator from the Veteran's Administration, and cooperated with UAMS and the VA to conduct research on the use of nuclear radiation. In 1971 an observatory dome was given to UALR and a 24-inch Cassegrain telescope was acquired to put in it. This was installed on campus on the roof of Stabler Hall. In 1971, Don and Dr. Larry Coleman began planning to get a planetarium at UALR. In the fall of 1975, the planetarium opened and for many years was a popular destination for school classes and the general public as well as UALR students and faculty.
Some of Don's other professional activities and achievements include serving as project director for the Arkansas Energy Office in 1976, receiving the first Donaghey Urban Mission Award in 1979, working with Dr. James Montague and other faculty in the Communicative Disorders field to study speech of Downs syndrome clients, and participating in the GRANDE collaboration to establish a neutrino detector in an abandoned barite mine pit near Magnet Cove. (While this project was not chosen for federal funding, the basic technology continues to be used in many locations around the world, including the ICE CUBE detector in Antarctica). From 1994 to 1998 Don brought many physicists to visit Arkansas, with the support of the Arkansas Space Grant Consortium Guest Lecturers in Astrophysics and Cosmic Ray Physics
Don was a member of the American Physical Society, Acoustical Society of America, Sigma Xi science honor society, and the honor society of Phi Kappa Phi. He also helped start the Sigma Pi Sigma physics honor society, and worked with other faculty to start a Boy Scout Explorer post which focused on activities in physics and astronomy, at UALR.
After Don retired in 2000, he continued to be an active member of Trinity United Methodist Church. He enjoyed swimming and loved music, both classical and popular. He took up playing the recorder and served as president of the Aeolus Recorder Konsort, the local chapter of the American Recorder Society. His passion became arranging music for recorder ensemble. He discovered the music of William Grant Still, the African-American composer who grew up in Little Rock. Don arranged some of Still's music for recorder ensemble and had several collections published by William Grant Still Music in Flagstaff AZ. He corresponded frequently with Still's daughter Judith Anne, and participated in a WGS tribute conference in Natchez in 2009.
Don is survived by his wife of 63 years, Shelley, and their three children, Sara Chiego (John) of Memphis, Steve of Norman, Okla., and Sheila Wold McKinnis of Little Rock, also by AFS daughter "Ragga" from Iceland, who lived with the Wolds in 1980-81. His five remarkable grandsons are Chris Chiego of Haverford, Pa., Andrew Chiego of Memphis, Peter Chiego of Reston, Va., Clark and Evan McKinnis of Little Rock. He was predeceased by his parents and his brother Richard Wold.
A celebration of Don's life will be held at Trinity United Methodist Church, 1101 North Mississippi, on Saturday, February 8 at 1:30.
In lieu of flowers, the family welcomes contributions to Trinity United Methodist Church or to Arkansas Hospice , #2 St. Vincent Circle—7 East, Little Rock 72205.
Special thanks to the medical team at UAMS, the staff of Arkansas Hospice, and in-home caregivers LaTisha Harris and Kelly Smith.
You may sign an online guestbook at www.ruebelfuneralhome.com.