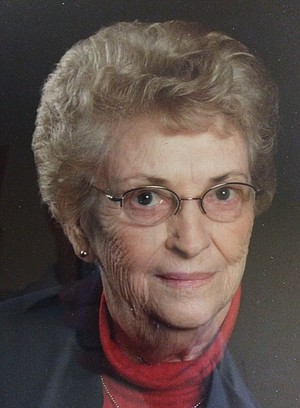 Geraldine (Jerry) Johnson Meeks, 93, of Little Rock completed her time on earth on June 28, 2020. She was born September 29, 1926, in Pocahontas, Arkansas and was married to Durette Johnson on September 1, 1944, until his death on December 31, 1996. On March 6, 1999, she was married to Lloyd Meeks until his death January 30, 2003.
Also preceding her in death are her father, Tom Haynes and mother Euel Wheeless Haynes, as well as brother, J.C. Haynes all of Pocahontas. Geraldine moved from Pocahontas in 1948 to become a beautician with business locations in East Little Rock and later in Southwest Little Rock.
Surviving is son, Jim D. Johnson and wife, Sherry of Little Rock, Arkansas and favorite (and only) grandson, Chad Johnson of Boulder, Colorado.
As her age progressed, Alzheimer's also progressed which required her to move from her home in Stagecoach Village (maintained spotless) to Brookdale Senior Living in December 2016. It was a challenge for her to leave her best friend, Maxine, but she soon blended into the ebb and flow of the Brookdale community. Although Alzheimer's is the disease of forgetfulness, she always remembered her son (Jimmy to her) and spoke about him often.
Her health took a sudden and dramatic change in mid June which required her transition to Hospice Home Care where she remained until her death.
A special thank you to the all staff at Brookdale Senior Living (Ashley, Rhonda, Kristen and many more) as well as resident, Curtis for making her feel safe and welcomed.
With a private graveside service at Masonic Cemetery in Pocahontas, Arkansas she will be buried alongside Durette, her husband of 52 years and the love of her life. www.SmithFamilyCares.com.