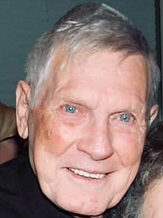 "…and the greatest of these is Love."

Edward Thomas Uekman departed his earthly home on July 23, 2020. He was a cherished family man, reunited with his wife of 66 years, Ida Jane. He was born July 15, 1929, in North Little Rock, Ark. He was second eldest of six children. He attended Catholic High School for Boys and graduated in 1947. He married in 1950 and they were soon blessed with two sons, Edward Charles (Sandy) and Daniel Paul (Danny).

Ed was an avid hunter and had a love for the great outdoors. He was a member of Denton Deer Camp joining in 1952, continuing relationships with other members for almost 70 years. He shared this love and knowledge of the outdoors with his two sons and grandsons, who remain members of the same Denton Deer Camp today. He worked many years with Fischer Honey as a bee keeper and further, as a plant worker, also sharing this knowledge with his sons. He was a beloved grandfather to four grandchildren: Denton (Debo) and Clint Pitts, Meagan and Garrett Uekman. He loved Razorback sports and throughout his life was adamant about searching for the game channel and time or sharing when they played, always calling his sons to make sure they watched as well. One of his favorite past times was making sure his birds were fed on the back porch. You could always find him in his chair by the backdoor window watching the birds and protecting them from any harm while shooing the squirrels from the feeders. After the bird watching was done and the Razorback game ended, he would always make the best vanilla ice cream cones for his family. Ed was a faithful member of St. Patrick Catholic Church and a practicing Catholic up until his final days. He was an active member of the St. Patrick Men's Club for many years. He was loved by many and will be remembered for his sweet nature and his beautiful blue eyes. His sweet nature also included a sweet tooth – he always had a pocket full of candy! Ed would greet everyone with a quick smile and an outstretched hand to offer a couple of atomic fireballs from his trouser pocket with an easy laugh.

Ed was welcomed to his heavenly home by his parents, his beloved wife, 2 brothers: Herman and Charles, and 3 grandsons: Debo, Clint, and Garrett. He leaves behind his 2 sons, Sandy (Robbie) and Danny (Michelle), and a granddaughter, Meagan, as well as 2 brothers: Eugene and Robert, his sister, JoAnne Mushinski, and a multitude of nieces, nephews, and friends.

In lieu of flowers, the family ask that donations be made in Ed's memory to Catholic High School for Boys.

"Believe that tears can heal, that memories can comfort and that love lives on forever."