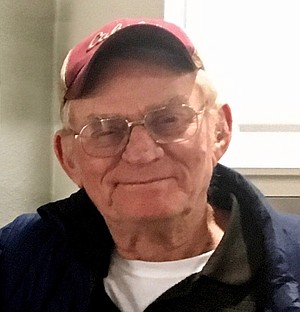 Melvin Douglas Johnson was born Sept 11, 1942 to the late William and Mildred (Ingersoll) Johnson in Prescott, Ark. He was a country boy who could hunt and fish and knew the value of an honest day's work. He loved his momma and gave his due respect to his dad.
In 1960, Melvin joined the United States Air Force as a jet engine technician. His first station was Perrin Air Force Base near Sherman, Texas, where he met Luna Carroll Phillips, on a blind date. They were married on his 21st birthday in 1963. He retired from the Air Force after 25 years of service and worked for Lockheed Martin for another 21 years.
A man of wit and endless practical advice, which was often laced with a little BS to keep things interesting, Melvin was "smarter than he looked". (That was one of his favorite sayings.) He was a hard worker in whom God gifted a bit of accident-proneness to keep him humble. Maybe it had something to do with him singing "Oh Lord, it's hard to be humble, when you're perfect in every way..." to his kids when they were little.
He was a man of many names. There is a clear as mud explanation as to why his wife calls him Johnny, his siblings and their kids call him Doug, his coworkers called him Maytag (he was an agitator), and everyone else called him Melvin. But, his favorite titles were Dad and Pawpaw. It did his heart proud knowing he and Carroll raised good kids. And he adored his eight grand and nine great-grand babies.
Among his many talents, Melvin sure could cook. His specialties were homemade pizza, cornflour catfish caught from trot lines on the Little Missouri River, Thanksgiving dressing, and a grilled steak that could curl your toes - all guaranteed to be the best you ever "ett."
He enjoyed playing poker and lived his life like he held his cards - close to the chest. He cared more than he wanted to reveal, was smarter than he wanted people to know, and if you were writing a book about him, he'd tell you to leave out a page and make it a mystery.
Melvin was preceded in death by his parents, brothers, Jimmy Johnson and Dickie Johnson, both of Prescott, Ark., sister, Gay Shelton of Hope, Ark., and son-in-law, Mark Witcher of Bentonville, Ark.
Survivors include: Luna Carroll Johnson (wife) of Prescott, Ark., Johnny (son) and Melissa Johnson, of Chesapeake, Va., Cary and Cheryl (daughter) Tobey of Bentonville, Ark., Theresa Witcher (daughter) of Bentonville, Ark., and Michael Johnson (son), of Branson, Mo. Also survived by his brother and best friend Jackie Lee (Jack) Johnson and his wife, Georgia of Mazon, Ill., and his sister, Joyce Boone and her husband, Mason, of El Paso, Texas, Four nephews and seven nieces.
Melvin was a character who will be greatly missed. No doubt, he had his share of "hold my beer" moments that'll be told, embellished, and retold at deer camps for decades. On June 18, 2020, we said farewell (for now) to our dearly departed, Melvin. "You dun good!"
Cremation arrangements are under the direction of Moore's Chapel in Fayetteville.
Memorial contributions may be made to Circle of Life Hospice Home at Legacy Village, 1201 NE Legacy Parkway, Bentonville, Ark., 72712.
To place an online tribute visit www.mooresfuneralchapel.com.