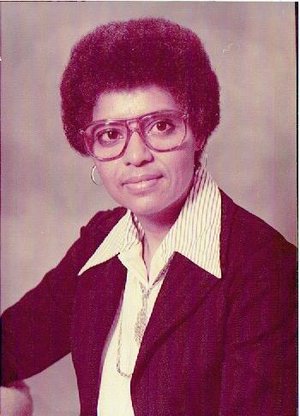 Raised by a rambunctious teenage mom, Mildred's childhood left her with an insecurity of her fabulousness, that remained with her throughout her life, despite constant confirmation to the contrary from anyone she met.

A mom at 16 years of age, Mildred left high school early, with a work ethic that would serve her well professionally and personally.

In her late 20's, having enough of racially segregated Arkansas, she moved to New York City where she made her home on the famous Strivers' Row in Harlem. She worked for Ma Bell (known now as AT&T) as an international operator for more than 35 years. She would tell of connecting more than one of her favorite Hollywood stars with their long-distance calls. A bonafide movie addict, these calls would delight her.

She confounded friends in New York, keeping to her promise to leave the big city to retire to what she called, the sweetest place in the world, Sweet Home.

A voracious reader of murder and mystery novels, she would devour James Patterson and John Grisham novels as well as Hollywood bios, but only if they were filled with tales of affairs and fun times. Daily reading of the newspaper and People magazine was a must.

Just like her novels, she loved a good murder mystery, scheduling her day as she watched one detective show or movie after another. On Demand viewing was a godsend! The exception was game shows, which she excelled at. The classics--The Price is Right, Family Feud, Jeopardy and Wheel of Fortune were required viewing. An avid sports fan, she continued to root for the Atlanta Braves in spite of constant heartbreak.

Her love of movies began in her teens, when she would sit in the colored section of the Center Theatre in Little Rock, watching movies all day. If you needed a movie phone-a-friend with a wealth of cinematic knowledge, it was her. That love of film continued in New York, and back home, passing it to her great grandchildren, Stacy and Julianna Williams. She enjoyed frequenting movie theatre, treating them to every new children's film debut.

Her passion for music permeates the family DNA. She and her friends partied at clubs on Little Rock's Ninth Street during its heyday in the 40's and 50's. While, she was in New York most of grandchildren's childhood, her visits to Little Rock to see family would be filled with Motown hits and music by vocalists Sarah Vaughan, Dinah Washington and other greats. Her granddaughters (Brigette Coleman Williams and Audrey Coleman) loved listening to music she played at home and during car rides. Years later, her great-grands, would sing along with her selections as they ran daily errands.

A loving, but not traditional grandmother, she took delight in any and everything Stacy and Julianna did, saying they were the smartest great-grandchildren ever!

It was Stacy as a three-year-old, who began calling her Grandma Candy, because of the big bowl of candy she always kept on her coffee table. The name was a hit, with family and friends utilizing her new title that she loved.

A constant learner, she loved nothing more than to travel. While she passed on her love of flying to Audrey and Stacy, Brigette and Julianna inherited her love of a road trip. On more than one occasion, she and her best friends would drive from New York to Little Rock or New York to California. One of her most fun rides, was a two-week adventure with her great-grands from Little Rock to Miami, with stops along the way and plenty of pictures.

A devoted friend, Mildred maintained childhood friendships of more than eight decades, as well as New York friends of more than 40 years as they retired to places around the country. With phone calls on special occasions, she continued to entertain friends with detailed hand-written letters providing them narratives of her activities, and of course her great-grands, who they had never met, but felt connected to.

For family and friends, she noted birthdays on her wall calendar, that would be updated at her kitchen table by Julianna at the end of each December as she double checked names, adding a few, and deleting friends no longer here. With happy anticipation, each looked forward to her raspy rendition of Happy Birthday with a big laugh to the delight of the recipient. Knowing she was ready for her final exit, she had gifts purchased in February for both granddaughters' March birthdays, with an early serenade to a niece with a late March date.

She could ‘light up a room' with her energetic laugh. Her youthful looks belied her years, with medical professionals always stunned at her age, energy and sharp mind. She was always doted on by nurses and aides who wanted to adopt her because no matter her condition, she was a kind, sweet patient who appreciated all the professionals who cared for her.

One of her proudest accomplishments was going cold turkey in her 40's. She said she was a functioning alcoholic, but decided one day, enough. She boxed up her ‘good liquor', gave it away and never looked back. She took up jogging, and until a serious fall at the age of 83, was walking three miles a day, and cutting her acreage daily. She loved a well-cut yard.

After compressing her spine in a home fall at the age of 83, she bested doctors' prediction of never walking again, refusing the prescribed scooter, working back to mobility with a walker. Through her fierce independence, she lived alone until she was 93. Reluctantly, but understanding the necessity, she moved into an assisted living facility almost a year ago.

The people to thank for her care are many.

Starting with her fall more than a decade ago, a thousand thanks to the crews at MEMS, who were always there quickly, with care and humor.

Thank you to the Wrightsville Volunteer Fire Department, also on the spot to assist when her emergency alert went off.

Much appreciation to the medical professionals who over the past decade have provided her with adoring care, and even remembering her joyful laugh on return hospital stays. Thank you to those at UAMS, Baptist Rehabilitation and CHI St. Vincent Rehabilitation.

An extra special thank you to the staff and residents of Melder House at The Green House Cottages of Poplar Grove, her recent home. While she reluctantly relinquished her independence, she enjoyed the care and laughs provided by her caretakers who treated her as their own great-grandmother. She welcomed the new friendships of the sassy women who shared her new home. We thank them all for a beautiful, safe and homey place and for in Mildred's words "treating me like a queen."

Love to her class at Allen Chapel AME, Sweet Home, whose visits over the years brightened her day with good conversation and laughter.

Two who will miss her: The Arkansas Lottery Department and the casinos in Tunica. Not one week went by without her hopeful purchase of a winning lottery ticket! And, prior to her fall, she made the weekly bus ride to enjoy time at the casinos, a joy she shared with her daughter Rose Nichols Coleman. Explaining to doctors after her fall, her purpose with therapy was use of her arms to play the slots, she accomplished her goal. Still unable to drive, but not unwilling to try, Mildred and her new road buddy and driver Calvin Williams, would make the weekly drive to Mississippi rain or shine. It was a treat for both.

Always saying, she was living way longer than she ever imagined, we are saddened for the loss of her physical presence, but we know she was ready to go. Amazed by how she readied her exit, to go out on her terms, we already have more laughs than tears. Her independence was priority to her; the increasing loss of her mobility was frustrating. An incredible woman of determination and survival, she never appreciated the palpable joy she brought to so many people living life to its fullest, fearlessly with joy, despite the obstacles she valiantly overcame.

She is survived by her baby brother Everett Summerville; grandchildren Brigette Coleman Williams and Audrey Coleman (Alan Wolfman); and the loves of her life and her "reasons for living as long as she did," her great grand-children Stacy and Julianna Williams; a host of adoring nieces, nephews, cousins and dear friends.

She is at peace, joining her daughter Rose Nichols Coleman, who preceded her in death, and sisters Martha Mary Taylor and Lucille Moore.

As we work through our various stages of Coronavirus shelter-in-place, practicing social distancing, we will honor her with loved ones when it's safe to do so.

In the interim, celebrate her joy as she would, by reading a good book with some B.B King in the background; or binge on TCM or a Fast and Furious marathon; or Wheel of Fortune and Jeopardy with a big bowl of Orville Redenbacher's popcorn with extra butter, her favorite.

Those who know her well know she hated funerals, so our need to social distance probably suits her just fine. We can hear her laughing now.