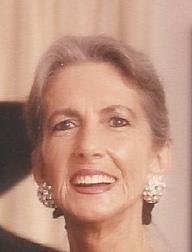 On Friday, May 22, 2020, Tommye Bailey Wells, passed at the age of 91, in Little Rock, Arkansas. Due to the ongoing worldwide pandemic, a private family graveside service will be held.

Tommye was born on August 16, 1928, in Detroit, Michigan, to Marguerite and Lamar Bailey. Tommye married David ‘Dub' Wells, and they had two sons, David and Stephen. Shortly after the birth of their son, Stephen, Dub lost his eyesight; an event that was cornerstone in shaping the driven, front-and-center personality for which Tommye was known. Rather than taking their new predicament as a hinderance, Tommye and Dub built a vibrant local drug store, Wells Drug, in Hampton, Arkansas, where the soda fountain was the center of town. Tommye also opened a women's clothing boutique in El Dorado, Arkansas, The Clothes Closet. Perhaps Tommye's most well know venture was the favorited Pine Bluff catfish restaurant, The Hush Puppy. For years, Tommye was the director of the Miss Calhoun County pageant, and was involved in numerous local and statewide civic and non-profit endeavors. Tommye was a member of the Board of Directors of the South Arkansas Telephone Company, in Hampton, Arkansas.

Tommye was a proud ‘Arkansas Traveler', traveling to, and spending weeks in swing states as a ‘Friend of Bill'; where she talked to local citizens about why she is supporting the Arkansas Governor in the 1992 presidential election, and asking that they support him, too.

Bridge and fashion among her favorite pastimes, Tommye was also known to many at the Oaklawn Jockey Club, where she loved to spend weekends with her husband and their countless friends. However, she never failed to be back in Sheridan on Sunday morning, where she and Dub settled, to provide donuts for the congregation of her beloved First Methodist Church. Not one to hide her opinion, everyone looked forward to a conversation with Tommye, which was always sure to be humorous and direct.