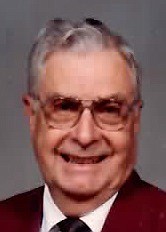 John was a loving, caring, and generous man who lived a wonderful life and was well loved. We will remember him for many things, his strong work ethic, devotion to his family, and service to others. His smile that lit up a room, his laugh, and his hugs will be sorely missed by his family and friends. John was a dedicated son, husband, father, grandfather, great-grandfather, neighbor, and friend. He dedicated many years of his life in service to his faith and membership in Baring Cross Baptist Church, as deacon, church treasurer, and volunteer kitchen staff. A World War II veteran, he served with honor in the Navy on the USS Boston in the South Pacific and was in Tokyo Bay for the signing of the Japanese surrender. John retired from Union Pacific Railroad after 42 years of service as an engineer. He also served as Chairman of the Board of the Union Pacific Credit Union, was a 33rd degree Mason, and active member of the Scottish Rite where he was president of the dining room for many years.