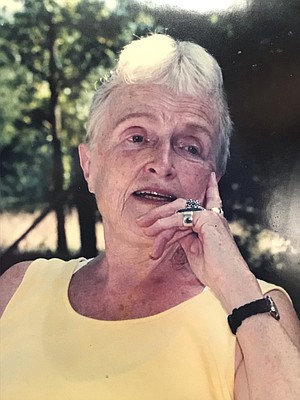 Elizabeth J. Reagan, age 98, passed on November 20, 2020. She was born to Clarence and Margaret Moore in St. Paul, Minn., on October 3, 1922. She earned her BSN from the University of Minnesota, and immediately put her education into practice by volunteering as a nurse in the NYC polio outbreak during WWII. She returned to the Twin Cities and married Robert M. Reagan in 1946. In 1947 became a full-time mother giving birth to the first of 13 children.

In 1950, the family moved from Minnesota to Albuquerque, N.M., then to Clarksville, Ark., finally settling in Fayetteville, Ark., in 1955. In 1956 they moved to a small farm on the south side of Fayetteville, into a house built by the builder of Old Main, known today as the Reagan Family Farm.

Some things most readers won't know about Elizabeth: She endeared herself to two retired neighbors, both farmers, from whom she and her family learned to grow a garden, plow and till a field, hand milk a cow, raise beef, chickens and hogs, build fence, put up hay and can vegetables. She was an exceptionally hard-working stay-at-home farm mother, still finding time to exercise her intellectual curiosity by attending university classes and doing her part for the community at large.

Subscribing early on to the writings of the health food enthusiasts (i.e. Rodale and Adele Davis), Elizabeth focused the farm on the practices now called regenerative agriculture. With the help of her children, Elizabeth was able to augment the family diet with home grown food from the farm. In this, as with many other things, she was ahead of her time. As a natural outgrowth of these practices, she held a deep care for the environment. A planted tree was a special joy to her. A felled tree was a lost battle, keenly felt.

Elizabeth describes herself as a doer; she was.

In the early 1970's she began auditing one class per semester at the U of A... Ben Kimpel (English Dept.) accepted her as an audit student. She took most of his courses. He directed her to other professors, in many disciplines. Her last course, Torts, was in the Law School. Over 45 years she accumulated ~250 audit hours. In 2017, the U of A Chancellor presented Elizabeth an inscribed class ring recognizing her continuous learning.

Elizabeth's curiosity must have had boundaries, but those were not readily visible. You can view a U of A video on Elizabeth by searching for "Short Takes: In a Class of Her Own" on YouTube.

The Reagan children remember their mother sitting at the old typewriter, once per week, ten-fingering a single-spaced, double-sided weekly journal. That journal is now available in Special Collections at the University of Arkansas Library.

Some of you will remember a woman walking the sidewalks of S. Fayetteville, the Square and Dickson Street with a plastic bag, picking up trash. That was Elizabeth on her way to or from her university class, in her small way sprucing up of Fayetteville streets. She served the public for several years as a member of the Fayetteville Parks and Recreation Advisory Board and on the NW Arkansas Free Health Center Board, now WelcomeHealth.

Besides walking from the farm to the University two or three times a week, Elizabeth ice skated. She loved ice skating, having grown up on ice in Minnesota. She spoke fondly of friendships she developed with fellow skaters and of the pure thrill she felt on ice. Donning her protective helmet and knee pads, she skated once or twice a week from the time the Jones Center opened until 2016.

Elizabeth opened her house and resources to anyone. She offered hot coffee or chocolate to the garbage collectors on cold days, cold water on hot days. When she could, she brought food to those without and drove those lacking transportation where they needed to go. She recognized neither class nor color. Some of the first black athletes at the University of Arkansas were welcomed into their first white home by Elizabeth. Sweet Pea "Gary White", the first dancing Razorback, still calls for warm conversations with "Mama Reagan"

Elizabeth was sometime saddened by the fact that she had outlived her contemporary friends. But she was braced, continually engaged and ever thankful for a group of younger women who were drawn to and communicated with her until her death.

In 2016, at age 93, Elizabeth announced to the family that she was quitting school and skating. Both had become too much of a challenge for her diminished driving ability.

Unable to be mentally and physically stimulated, her decline accelerated. She was lucky to have a daughter in Fayetteville, also a nurse, who cared for her as mobility declined. But she never lost her spark , humor or curiosity. She listened to Jeopardy religiously and, to her nurse's chagrin, demanded candy whenever handed vitamins. Her family and friends visited regularly in her final years.

Dying is not on anyone's wish list, but we all die. Some are lucky enough to have lived full and long and to have died in the care of family and friends. Elizabeth Reagan was one of those lucky people. Arguably a luck brought on by her many years of kindness.

At a future time, a memorial service will be held at the Reagan Family Farm.

Cremation arrangements are under the direction of Moore's Chapel in Fayetteville.