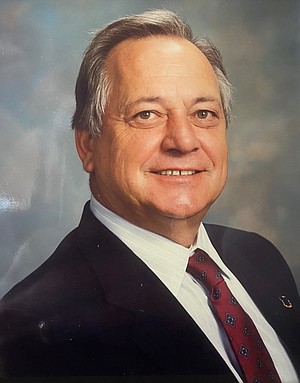 JACK KINNAMAN, 86, died Thursday morning at his home in Little Rock. Kinnaman founded Kinco Constructors of Little Rock in 1974, and over the course of a long career his company left it's mark on projects throughout the state, including Donald R. Reynolds Razorback Stadium in Fayetteville and the Bill and Hillary Clinton National Airport in Little Rock.

Raised in southeast Missouri, after working as a laborer on a power plant as a summer job after high school graduation, he found construction to be exciting and made it his lifetime passion. Kinnaman worked on numerous large power plant & municipal projects across the nation for Gust K. Newberg Construction. He arrived in Little Rock in 1971 as project manager for the new Baptist Medical Center. Upon completion, Kinnaman and his family decided to make Little Rock home as they had fallen in love with central Arkansas.

Few people are capable of great success, fewer still are willing to share the success with others. Jack was one of those unique few capable of both finding his dreams and sharing them with others. Jack gave back in many ways, not only to his profession, but also his community, church and family. He devoted his time to construction education across the country. In service to his profession, his recognitions and contributions include: University of Arkansas Little Rock 2004 Athletics Hall of Fame and recognized as one of UALR's most substantial supporters. He also received the UALR Honorary Doctorate in Construction Education in 2013. He began the Jack Kinnaman Constructor Endowed Scholarship and the Phyllis Kinnaman Memorial Scholarship in memory of his first wife. Arkansas Construction Hall of Fame, Arkansas Business Executive of the Year. American Institute of Constructors: College of Fellows, Board Member and Executive Committee, Past National President, First President of Arkansas Chapter, Leadership Award in 1990 and 1980 Associated Builders and Contractors: Past President, Arkansas Chapter, National Board Member, Liaison Chairman AIA, Arkansas Man of the Year 1982 and 1980, Chairman, Speakers Bureau, chairman, Partners in Education. American Council for Construction Education: Past Trustee and Member; Certified for Accreditation Visitation. Arkansas State Building Services Council: Past Member. American Arbitration Association: Certified Arbitrator. Advisory Boards: University of Arkansas, John Brown University, Southern Arkansas University, Clemson University. Arkansas State Chamber of Commerce: Board of Directors. Class II, Chamber of Commerce Leadership Institute, Watershed Project Advisor, Junior Achievement of Arkansas: Past Board Member.

Jack remained very involved in his church where he was a deacon, Sunday school teacher, Building Committee member and participant in the Living Christmas Tree program at First Baptist Church of Little Rock. He later joined his wife, Marge, at the Park Hill Christian Church in North Little Rock where he enjoyed teaching Sunday School.

Jack shared his love for people and music in many ways all over the world. Friends recently recalled: "I remember watching Jack sing folk songs in a bar in Scotland while on a golf trip with friends. The act playing that night went on break, Jack walked up and sat down on the stool and took the guitar and started cranking it out. One song after another, at one point the whole bar was singing. Great stuff." In 2001, Kinnaman and his daughter, Anne, joined slightly better-known artists such as Emmylou Harris, Rodney Crowell, Steve Earle, Darrel Scott and Delbert McClinton in recording a CD of songs written by Texas songwriting legend Guy Clark. The CD was a gift to Clark on his 60th birthday.

Friends recently commented "Jack would always take time to mentor you, teach you, coach you. He truly had an incredible vision for his company and his employees. He cared deeply for each and every one of us". And also,

"My heart is breaking for all of my sweet Kinnaman loved ones. The love of family has always run deep in your home. I can remember as a teen coming over at Christmas and almost being overwhelmed with the joy your family had at expressing their love for each other. It was a great gift to know and love both Jack and Phyllis Kinnaman. And I know how much they loved all of you and were so proud of their family."

Funeral Services will be held at Park Hill Christian Church in North Little Rock. Due to COVID-19 restrictions, services will be for family members only.

In lieu of flowers, the family requests that donations be made to the UALR Phyllis Kinnaman Memorial Scholarship.