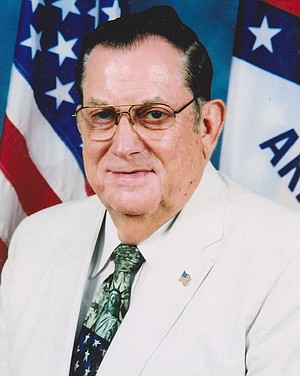 Lee Roy Owen, age 86, passed away Wednesday, November 18, 2020, at Washington Regional Medical Center in Fayetteville. He was born on May 16, 1934, in Lowell, Ark., to William Roy and Floy Jane (Wells) Owen. He is preceded in death by his loving wife of 62 years, Patricia Owen; daughter, Waunell Owen; brother, Henry Owen; and sister, Florence Robinson.

Lee spent his adult life in service to others starting with the US Navy where he was a Gunner's Mate, 3rd Class. While serving his country, Lee was awarded the Good Conduct Medal, National Defense Medal, and China Service Medal during the Korean conflict.

After his honorable discharge from the US Navy, Lee served with the Upland Police & Fire Department in California until he took a position with the Siloam Springs, Ark., Police Department, where he attained the rank of Assistant Police Chief.

In 1968, Lee became a charter member of the Arkansas Law Enforcement Training Academy, and was appointed as Chairman by Governor Winthrop Rockefeller.

In 1970, Lee was appointed by President Nixon to serve as U.S. Marshal of the Western Arkansas Judicial District, where he gained national recognition. When under court order, evicted a cult from a government financed house in Grannis, Ark.

In 1975, on his 41st birthday, Lee graduated from Northwestern Oklahoma State University with a Bachelor of Science in Criminal Justice.

In 1995, Lee began serving as Captain with the Washington County Sheriff's Office where he was supervisor of daytime patrol, 911 communications, civil process and the warrants division. He was also the coordinator of prisoner transport and training.

If you knew Lee then you knew how much he loved his family, loved writing songs, and loved singing. He spent many hours donating his time to help others and he continued to serve even after retirement. He was always taking his singing show on the road to raise funds for Meals-On-Wheels, senior centers, and others. He was a regular entertainer at some of the local nursing homes, where everyone loved hearing him sing his original songs.

When asked for a comment about Lee's passing, Sheriff Helder said, "Lee was the genuine "singing sheriff". We lost a larger than life icon of law enforcement today."

Beyond Lee's law enforcement and government involvement, he was also a 32nd degree Mason with the Masonic Lodge.

Lee could be found serving his community in many ways including sitting on the board of the Center Corner School where he attended grade school, participating in the NW Arkansas Song Writer's Association, as well as serving as a deacon at First Baptist Church of Fayetteville. He was also active in the Gideon's International where he shared his testimony for many years. throughout the community.

A visitation will be held from 4-6 p.m., on Monday, November 23, 2020, in the chapel of Nelson-Berna Funeral Home in Fayetteville. A funeral service will be held at 1 p.m., on Tuesday, November 24, 2020, at First Baptist Church located at 20 E. Dickson Street, Fayetteville, Ark., 72701. Interment will follow at Mount Hebron Cemetery in Cave Springs.

In lieu of flowers, memorial contributions may be made to The Gideons International at www.gideons.org., or the Washington County Fraternal Order of Police at P.O. Box 506, Fayetteville, Ark., 72701.