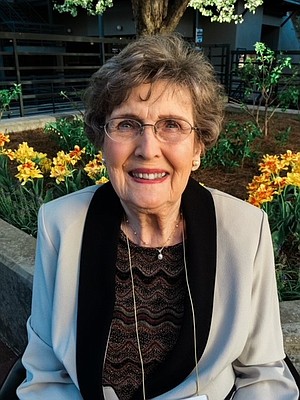 Olive Jane Hughes age 95 died November 11, 2020 in Fayetteville, Ark. She was born July 1, 1925 in Madison, Wis., to Carl and May Wipson. She graduated from Madison East High School in 1943. She joined the United States Nurse Corp in 1944 and completed nurses training as a Cadet Nurse at Michael Reese Hospital in Chicago. She earned a BS Degree in Nursing-Ward Management from the University of Wisconsin – Madison in 1951. After graduating, she worked at Milwaukee County Hospital and then married Raymond Hargett Hughes in 1952.

Jane was an active member of St. John's Lutheran Church in Fayetteville where she served on numerous committees such as the LWML and Altar League. She also served as a leader with the Cub Scouts and Boy Scouts of America. Later, Jane worked at the University of Arkansas in the student infirmary.

She was also a member of the ANA (Artists of N.W. Arkansas), the Sunny Hills Study Club and bridge clubs.

She was preceded in death by her parents, and her husband of 58 years, Professor Raymond Hughes, who passed in 2010.

Jane never hesitated to lend an ear or a hand to those in need, and she spread kindness and love tirelessly in her family and within her community. She had kind words and a warm heart for everyone.

A socially distanced graveside service for family will be held at Fairview Cemetery in Fayetteville.

A celebration of Jane's life will be scheduled at a later date.

In lieu of flowers, memorials may be made to Butterfield Trail Christmas Fund at 1923 E Joyce Blvd, Fayetteville, Ark., 72703.