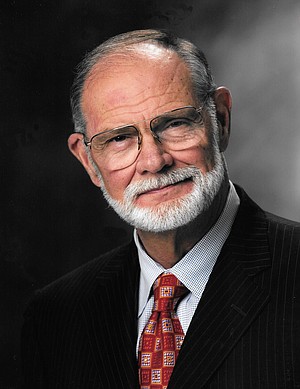 Mac Troy was born in Oceanside, Calif., the son of Jewell A. and Annie Laura Sandage Troy. His parents were from north central Arkansas. During his childhood, the family moved between Arkansas and rural southern California where his father worked for a ranching family. After spending summers in California, Mac and his mother would return to Heber Springs, Ark., each fall where she was a beloved teacher at the small, rural school house, teaching several generations of families.

In 1956, the family made a final move back to Heber Springs. His parents were very active in their community. Mac graduated from Heber Springs High School, where he was very active in athletics and student government. His senior year he served as student body president.

While Mac was a student at the University of Central Arkansas, he served as VP of Sigma Tau Gamma fraternity. He always credited his college and fraternity experience for playing a crucial role in preparing him well for life after college. He was involved in a number of campus activities, and later was named to Who's Who in American Colleges and Universities. He graduated in 1965 with a B.S. degree in English.

Always interested in being a writer, he found his career niche when in 1970 he was hired to write and produce television commercials and special programs at KATV in Little Rock, AR. His work attracted the attention of advertising agencies and he soon accepted a position as creative director with one of Arkansas' largest agencies.

Mac loved the outdoors and was attracted to skill-intensive activities that included a good portion of danger. He raced motorcycles and sports cars, ran triathlons, and was a skydiver for more than 20 years. He climbed the third and fifth tallest mountains in North America, Mount Popocatepetl and Mount Citlaltepetl, in Mexico, as director of a documentary film crew. He loved to play his guitar for relaxation, and spent many days backpacking the Pecos Wilderness of New Mexico.

In 1985 the news director at KOCO-TV invited Mac to come to OKC to lead the station's special projects. Mac agreed, and for the next 15 years he was the executive producer of projects, such as "5 Who Care", "Aerospace America", "Opening Night", and documentaries such as "Black Gold Blues", and a Western Heritage documentary for which he was honored in 1990 at the Houston International Film Festival.

On January 10, 1998, Mac and Carol Craven Wilkinson married in Santa Fe, N.M. They loved one another deeply and enjoyed sharing good books, long mountain hikes, entertaining with Oklahoma friends, traveling to new places and returning to some well-loved ones again and again.

He was preceded in death by his grandparents, G.B. Sandage & Ida Lee Sandage; his parents; his aunts and uncles, Hazel & J.C. Harmon, and Dewey & Wanda Sandage; and his brother in law Dr. Phillip Randolph Craven. He is survived by his wife Carol; his step daughters and their husbands, Laura & Bob Gable, and Melinda & Dallas Lee. He is survived by two very special grandchildren, Isabel Jean Gable of and Dallas Pace Lee, Jr. He is also survived by his sister-in-law, Pamela Craven; cousins and their spouses, Shannon & Brad Bright, David & Brooke Craven, Sara & Jerry Broxterman, Carolyn & Ray Howard, and Katie Sandage. His family is grateful to the many fine physicians and nurses at the Oklahoma Heart Hospital and Mercy Hospital for their care during the past two months. They are also very thankful for the many friends from far and near who sent good wishes, prayers, and their love to him.

A private family service and burial will be held at Grove Hill Memorial Park & Funeral Home in Dallas, Texas, followed later by a celebration of Mac's life in late spring or summer in Oklahoma City when the pandemic has ended. In lieu of flowers, the family asks that memorials be made to Leadership Oklahoma City, 730 W. Wilshire Blvd., #116, Oklahoma City, Okla., 73116.