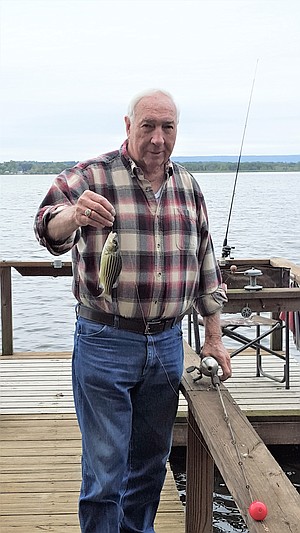 James Ellis Via, 87, of Sheridan, AR, passed away October 1st, 2020. James, or as most knew him, as "J.E", was born May 1st, 1933 in Wilson, AR (Mississippi County) to the late Ovid Osco Via and Rhea Glascock Via. His family moved to Cleveland County around 1940, where he attended Glendale School. He was reared in a family of tenant farmers and sharecroppers, along with his 7 siblings until May 1st, 1952, when at the age of 19, he enlisted in the United States Air Force. He was stationed at San Antonio then shipped to Japan during the Korean War. While in the Air Force, he was in charge of the mess hall, feeding 1500 servicemen 3 meals a day. After 4 years of being in the Air Force, he returned to Cleveland County and worked at various jobs including the shirt factory in Star City, Browns Furniture Manufacturing Plant, and different building contractors in Pine Bluff before becoming self-employed, laying ceramic tile in commercial and residential properties throughout southern Arkansas. In the early 1970's, JE began his lifelong career building and contracting homes and other real estate investments and developments. He was the owner of Southern Pines Real Estate and J.E. Via Construction Co. He retired in 2017 at the age of 84, after he built his last house in Mtn. View.

JE's life revolved mostly around his children, Tammie Travis Blake (Lyle) of Morrilton and Jennifer King (Rodney) of Rison; 2 grandchildren, Kurt Ellis Elms of Morrilton and Olivia Grace Valentine of Rison, who affectionately called him "Nono"; and a proud great-grandpa to Hunter Ellis Elms and Keira Elaine Elms in San Antonio. He is also survived by three brothers, Willis Via and Jimmy Via both of Star City and Jerry Via of Pine Bluff. JE Enjoyed fishing, antique car shows, driving and riding around the back roads, especially in the mountains, and cheering for the Dallas Cowboys. He looked forward to his daily "round table" breakfast, lunch and coffee visits at the former George's Place in Pine Bluff, the former Irish Maid Donuts in Pine Bluff and for the last 15 years at Jo's Diner in Sheridan.

He is preceded in death by his parents; 1 sister, Betty Via Sowrheaver; 3 brothers, Harold Via, Charles Via and J.D. Via; and a son, James Chadwick Via.

Graveside services only are at Greenwood Cemetery at Mt. Elba in Rison, Tuesday, October 6th at 2:00PM with Bro. Phillip Green officiating, visitation will be at 1:00PM at the cemetery. Honorary pallbearers will be the coffee drinking, word problem solving crew of the round table at Jo's Diner. The family will be at the home of Jennifer and Rodney in Rison. Arrangements by Griffin Funeral Service in Star City. Online guestbook at www.griffinfuneralservice.net.