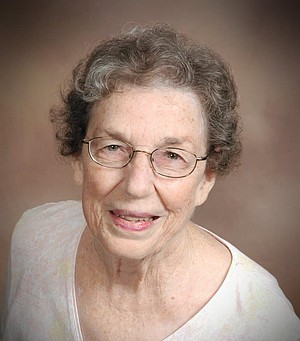 Eloise Jones Harris, age 87, of Little Rock, Ark., passed away October 11, 2020. She was born May 20, 1933, in Rye, Ark., to the late Beatrice Ruth Taylor and Travis Fred Jones. Eloise was preceded in death by her husband of 66 years, George Rodgers Harris of Little Rock, Ark.; her older sister, Doris Laverne Morgan; and younger brother Thomas Howard Jones both of Rye, Ark. She is survived by two daughters, Rhonda Reilly (Jim), Bonnerdale, Ark., and Carmen Tucker (Charles), Rye, Ark.; a brother Billy Ray Jones of Rye, Ark.; four grandchildren, Allison White (Chris), Travis Reilly, Lisa Davis (Lindon), Kacy Johnson (Chris); and 10 great-grandchildren.
Eloise graduated from Woodlawn High School in 1951 and attended Capitol City Business College in Little Rock, Ark. She was one of the founding employees of Varco Steel (now Varco Pruden) in Pine Bluff, Ark. In 1964 she moved with her family to Natchitoches, La., where she and Rodgers were partners in brick
plants and other ventures. She moved with her family to Naples, Fla., to develop a real estate project with partners in 1970. Upon completion of the real estate project Eloise and her family moved back to Natchitoches, La., where she and Rodgers retired in 1980. They moved back to Arkansas to be
with family and friends in 1984.
Eloise and Rodgers were avid dancers. They began square dancing in 1976 and were members of the State Board of Square Dancers for Louisiana. Eloise served as State Treasurer for many years. Their interest in dance moved from square dancing to ballroom dancing where they served as Vice President and Treasurer of the Pine Bluff Chapter of United States Amateur Ballroom Dancer Association.
Eloise was a member of Friendship Missionary Baptist Church in Calmer, Ark. She was a student of the Bible having attended the Bible Study Fellowship in Pine Bluff while living there and Bible Study at Enon Missionary Baptist Church while living in Rye. She is a child of God and no doubt happy to be home in heaven with her "Rodge" holding her hand once again.
A celebration of her life will be held at 1:30 p.m., Wednesday, October 14, 2020, at Enon Cemetery in Rye, Ark., with Bro. Doney Blackerby and Dr. Michael Stroh officiating. Burial will be in Enon Cemetery by Frazer's Funeral Home. Pallbearers are Travis Reilly, Chris Johnson, Jake McClain and Lindon Davis. Visitation will be 1:00 p.m. until service time on Wednesday, at the cemetery. Online guestbook www.frazerfuneralhome.com