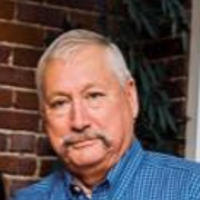 Kimron Thural Crutchfield, age 66, died peacefully at home in Sheridan, Ark., on October 18, 2020. He is survived by his wife of forty-seven years, Myra; his children, Ty (Holly) Crutchfield and Haven (Kevin) Brown; grandchildren, Noah and Evan; his sisters, Suni (Eddie) Suttle, Meri Crutchfield, Jeri Crutchfield; brother, Kevin Crutchfield; best friend, Donnie Winston; faithful dog, Gus; and countless family and friends. Kim was the son of the late A. T. and Ruth Anne (Sides) Crutchfield. He was a 1972 graduate of Sheridan High School. He worked at various construction companies including Benning's Construction and Pickens-Bond. Kim was a hard worker who built parking decks, Sam's, and Wal-Marts all over the South. He eventually became co-owner of Progressive Constructors Incorporated. He began competitively shooting skeet in the 1980s becoming one of only three Arkansans to shoot a 400x400, meaning he shot four hundred targets without missing. Kim won various skeet tournaments and competed in the World Skeet Shoot in 2005. He belonged to Blue Rock Gun Club and Benton Gun Club. He enjoyed being outdoors working on his tractor, falling out of kayaks with his friend Donnie, and hunting prairie dogs with his friend Rusty. Kim and Myra enjoyed traveling with the KCW Traveling Club from the east coast to the west coast. He traveled with Myra and daughter Haven to Yellowstone and enjoyed watching the wildlife. Kim had the ability to make something out of nothing and seeing the potential in something and in places that others could not. He will be greatly missed. Visitation will be held Tuesday, October 20, from 6 p.m. to 8 p.m., at Memorial Gardens Funeral Home. There will be a graveside service Wednesday, October 21, at 10 a.m., at Philadelphia Cemetery in Prattsville. In lieu of flowers, the family requests donations be made to The Counseling Clinic, 110 South Pearson St., Benton, Ark., and the Youth Shootings Sports Program with Arkansas Game & Fish. Arrangements by Memorial Gardens Funeral Home of Sheridan (870) 942-1306. www.memoruialgardenssheridan.com