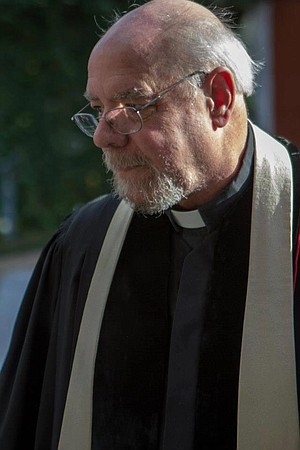 The Rev. David Harrison Dyer was born in Munich, Germany, on July 22, 1948. His dad, Vernard C. Dyer, was an Army Master Sergeant and his mother, Maxine Laflin Dyer, was a nurse. David lived the life of an Army brat, moving about to a number of places in the US. He attended King College in Tennessee, and then went to Union Seminary in Richmond, Va., where he earned his Doctor of Ministry. He was a minister in Presbyterian churches in Richmond and Houston before coming to Little Rock to serve at Westover Hills. He has since served as a minister or interim minister at several churches in Arkansas. He was serving at Westminster Presbyterian Church in Little Rock at the time of his death. He was a wise and faithful leader who brought the Word of God to many and assured us that the Lord holds us dear.
David went from this world peacefully at home on August 29th. He leaves many people to remember him with love. Among them: Marian, his wife; daughters, Jennifer (Marc) and Lucy (Mike). He has two grandchildren, Joseph and Miranda, whom he loved beyond measure. He was dear Uncle David to his sister's children, Suzie, Mike, and Julie; and his wife's nieces and nephews.
David was extremely generous with his time, knowledge, and money. He counseled and mentored many, and always had time to listen. Recently, he taught the Friday morning Bible Class at Pulaski Heights Presbyterian, and was a regular lecturer at Life Quest. He brought excitement and a great deal of humor to his lessons. He was a font of knowledge, both useful and useless. David loved his pets. He had faithful dogs that spent the days at his side and slept with him at night. He was a friend to the stray and unloved. This can be said of animals and people. It is difficult to sum up this man's life in a few words. Each of us has a unique memory of him and what he meant to us. He is home now with his beloved parents, sister and brother-in-law; they are sitting around a kitchen table, laughing.
For those who wish to make memorials to him, please send them to either Pulaski County Animal Shelter or the Presbyterian Disaster Relief, or to a charity of your choosing. He would support any form of giving. Arrangements are under the direction of Ruebel Funeral Home, RuebelFuneralHome.com