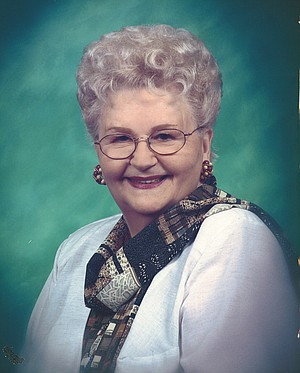 June Marie Self, 88, of Rogers, passed away September 15, 2020 in Springdale. She was born April 13, 1932, in St. Louis, Mo., the daughter of Frank and Parilee Flake Silvertooth. June managed several restaurant's before becoming the founder of Northwest Arkansas Food Bank in 1989. She was the director for 13 years which the City of Bethel Heights named the street after her – June Self Drive. She was very strong willed and spunky person.

In her younger years she and her sister sang on the Radio in St. Louis and played in many productions there. She enjoyed cooking and baking family meals, singing the Blue's and had a great compassion for animals. Her family was most important to her, as she enjoyed cheering them on in sports and musical performances. She was a member of Southside Church of Christ and an attendant at the Downtown Church of Christ.

She is preceded in death by her parents; husband, Berven; siblings, Don Silvertooth, Jane Marsh, and Ginny Pruitt.

Visitation will be Thursday, September 17, 2020, 12 p.m. to 2 p.m., with services beginning at 2:00 in the chapel of Benton County Funeral Home, 306 N. 4th, Rogers. Interment will follow in the Rogers Cemetery. In lieu of flowers memorial contribution may be made to Sacred Selections, 4144 Shores Rd., Murfreesboro, Tenn., 37128. Online condolences to www.bentoncountyfuneralhome.com