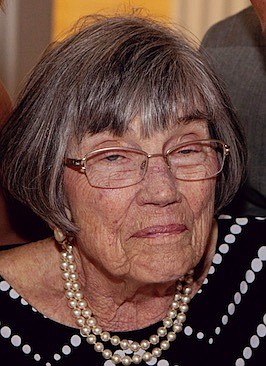 Marylou Mason Wren passed quickly and peacefully from this life to the next on November 10, 2018. She was born April 7, 1929 in Pittsburgh, Pennsylvania, and grew up there as the only child of Lou and Marie Mason. Marylou graduated from Stephens College and Northwestern University where she was a Tri-Delta. She met Jim Wren, an SAE, at Northwestern and married him on October 1, 1950. They made their home in Little Rock, Ark., until work took them to Richmond, Virginia, and then to Woodbridge, Conn. They retired to Little Rock then moved to Mechanicsville, Va., to be close to their daughters, Jennifer Newcomb and Katy Cutchins. At the time of her death, Marylou lived in Virginia Beach, Va., having moved there with Katy. Marylou was a dedicated wife, mother and homemaker and a proud grandmother and great-grandmother. She was an accomplished cook and baker, a voracious reader and a lifelong learner. Marylou loved to travel. New York City was her favorite place in the world. She celebrated her 80th birthday there, shopping, taking in the sights, attending a Broadway show and eating at her favorite restaurants. Marylou pursued her love of horses and horseback riding throughout her adult life. Her last ride was on a Lipizzaner stallion at the age of 85. Marylou is survived by her daughters and their husbands, Dennis Newcomb and David Cutchins; her grandchildren, Bryan Newcomb, Jessica Newcomb Leeson (Nick) and Hope Cutchins; a great-grandson, Brooks Leeson; and a great-granddaughter, Charlotte Leeson, born this year. In addition to her parents, she was preceded in death by her husband and their three infant sons, David, Steven and Jeffrey. Marylou will be buried next to Jim and the boys in Roselawn Cemetery, Little Rock, on October 1, 2020, returning to Jim's side on their 70th wedding anniversary.