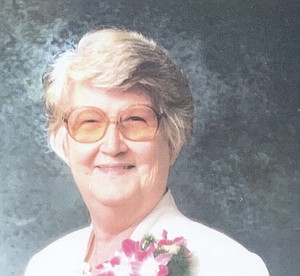 Vernia Josephine Hendrix was born on January 3rd, 1932 to Dewell and Josey Arey; a mother(mom), grandmother(nanny, granny, me-maw), great grandmother, aunt and life-long resident of Benton, AR went to see our Lord on September 27, 2020 at the age of 88. Her loss will be felt by so many, but her love, testimony and impact on so many lives will never be forgotten. Vernia married her soul mate at 15, Dallas Hendrix, beginning a love story that would stand the test of time and lead to the creation of a beautiful family and home full of love, faith and laughter. She was the heart and soul of it all. Even in loss, her love of Christ shown brightly, as she experienced the death of her parents, husband, Dallas Hendrix, her baby girl, Christy Hendrix Barnett, her brother Dewell Arey and her grandson, Matthew Brooks. She leaves behind so many that will carry on her legacy. She was survived by her sisters Shirley Laster and Virgina Lewis; her children, Vernia Ann Thorn and husband Lynn of Dallas, TX, Dallas Hendrix and wife Shelia of Austin, TX; Dennis Hendrix; David Hendrix and his wife Dana of Benton, AR and Doug Hendrix and his wife Yvonne of Benton; Michael Barnett also of Benton, AR. She was blessed with 31 grandchildren, Paij Thorn-Brooks, John Thorn and his wife Gabi; John Hendrix and his wife Maggie; Dustin Hendrix and his wife Kaylynn; Steven Hendrix, Amy Nalley and her husband Kevin; Chad Hendrix and his wife Anna; Stephanie Smith and her husband Zach; Nick Hendrix, David Hendrix JR and his wife Brixey; Dexter Hendrix and his wife Jaymie; Dawn Roberts and her husband JD, Danielle Mitchell and her husband Matt, Kate Davidson and her husband Aaron, Landon Parker and his wife Kylie, Emily Bradford and her husband Chad, Dallas Barnett and Kristyn Barnett; 26 great-grandchildren Alex, Katelynn, John Matthew, Clayton, Grace, Lily, Halle, Kinlee, Knox, Jax, Carson, Cassius, Collin, Cai, Evie, Michael, Merritt, Eden, Chloe, Callie, Owen James, Eleanor, Owen, Emma Kate, Drake and Eli. Vernia's love of and faith in Christ, was part of every fiber of her being, as was the love of her family. Her family was large, but she managed to know each and every member intimately and gave of herself selflessly to listening, teaching and helping no matter how busy or tired she was (even when our brain's cracked as teenagers). When she talked about her family, it was not just one or two of them, there was a story about each and her eyes would light up as she told them; any stranger or loved one could feel her love and pride pour out as she spoke. Vernia's mind was a steel trap and her intelligence made her quite the conversationalist. She was so good at so many things and did each of them with love, whether she was sewing Halloween costumes, cleaning her church, cooking for her family, playing words with friends, or shopping(she loved a good deal). She was also very well known for hosting tea parties for little girls, playing scrabble, setting up lemonade stands and playing with trucks. She was very good at making magical days for her grandchildren and great-grandchildren, even though they might have to sit on the anvil if they misbehaved. Vernia Hendrix led her family with grace, dignity, strength and an unmatched love, she was truly the definition of a Godly Woman, Wife, Mother and Friend. This world will not be the same without her but her family will honor her legacy, continuing to love Christ and each other fiercely.
Services will be held at Forest Hills Missionary Baptist Church on Wednesday the 30th, 2020 at 10 am, with the burial immediately following at Smith Rosemont. The visitation will be held at Ashby's Funeral Home in Benton on Tuesday the 29th, 2020 from 6-8 pm.
Pallbearers will be John Thorn, John Matthew Brooks, John Hendrix, Dustin Hendrix, Steven Hendrix, Chad Hendrix, Nick Hendrix, David Hendrix Jr., Dexter Hendrix, Landon Parker, JD Roberts, Matt Mitchell, Aaron Davidson and Chad Bradford. Online guestbook at www.ashbyfuneralhome.com